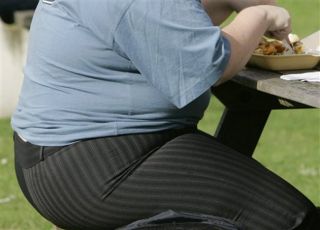 An overweight person eats in London on Wednesday, Oct. 17, 2007. Airlines often have formal or informal policies in place to make passengers who are large enough to be regarded as clinically obese to buy an extra aircraft seat, the cost of which is refunded if the flight is not full, and to prevent the passengers boarding if they refuse. Some airlines are very reluctant to discuss the issue publicly, regarding it as one of potential discrimination. However, U.S. airlines' ultimate protection is that FAA regulations require airlines to deny boarding to passengers if the passengers cannot close their seatbelts after extensions have been attached.
(Image: © AP Photo/Kirsty Wigglesworth)

Stress related to jobs and overdue bills is pretty much the American way these days. And now science has confirmed what we suspected — financial stress has a way of turning into body fat.

Yes, you can blame your increased poundage on the recession now, at least if you already had a propensity to portliness, according to a new study.

Today's economy is stressing people out, and stress already is linked to such illnesses as heart disease, high blood pressure and cancer, said Dr. Jason Block, who headed up the study as a Robert Wood Jonson Foundation Health & Society Scholar at Harvard University.

So Block and his colleagues wondered about the possible link between weight gain and stress of various kinds, including financial stress. They found that the association was not there for people of normal weight but scaled up in a linear fashion among subjects who started out overweight in 1995 when the study began.

The more overweight a subject started out, the more they gained stress-linked weight by the end of the study in 2004. Most Americans are overweight, so that means the result holds up for most of us.

"Because of the financial challenges faced today, it's very likely that stress would be increased at the current time," Block told LiveScience. "If stress is increased, it seems logical, based on our results, to suggest that people with higher BMIs [body mass indexes] might gain more weight during this time. Further research will have to sort this out more completely."

A total of 1,355 men and women were questioned by Block's health care policy research team for the study. Subjects answered survey questions via phone and a self-administered questionnaire at the beginning and end of the study period. Some subjects were also examined in person. The subjects were asked to answer questions about various types of psychosocial stress in their lives, as well as their weight, height, and other general variables.

Previous research had waffled on whether stress was a risk for gaining weight. Block found that stress is a weight-gain risk for people who are overweight and obese as defined by their BMI — a body-fat index based on the ratio of one's weight to their height. A higher BMI usually means more fat and more risk for diabetes and cardiovascular disease (although higher BMIs can also be found in someone with large muscle mass who is at a lower risk for these diseases compared to a person with normal muscle mass and a high BMI). Not everyone agrees that BMI is a good way to assess health risks, but it's a handy barometer commonly used by researchers.

Stress was statistically associated with greater weight gain among "higher BMI" men and women who reported stressful job-related demands and/or difficulty paying bills. (As a side note, while men started and ended the study with a higher BMI on average, women gained more weight, on average.)

While financial burdens were a factor for men and women with higher BMIs, women's weight gain was affected by more types of stress — some of it non-financial. Specifically, feeling constrained by life circumstances (an example would be feeling helpless in dealing with the problems of life, or feeling like others determine most of what one can and cannot do) and difficult family relationships were also factors for females.

Among the higher BMI men, these non-financial sources of stress played no role in weight gain. Instead, along with the tough jobs and bill problems, men's waistlines expanded in response to lack of decision authority at work (an example is having no say in deciding what tasks you do at work and how you do them) and lack of skill discretion, that is, the ability to learn new skills on the job and to perform interesting job duties.

The strange result was that stress caused no weight gain among those who started out the study at a normal weight. Why? Overweight and obese people might be more prone to rapid rises in cortisol (a stress hormone) when stressed out, which could lead to more weight gain, Block said. These folks might also experience a calming effect after eating, from the release of natural endorphins. This "comfort food" experience might stimulate them to eat more food to cope with stress.

The research, detailed in the July 15 issue of the American Journal of Epidemiology, was supported by a grant from the National Institute on Aging, as well as the John D. and Catherine T. MacArthur Foundation Research Network on Successful Midlife Development.

So, would an economic recovery slow down our expanding waistlines? Sure, Block says … if stress levels also declined with the upturn.

However, in the meantime, and alongside any recovery, he also recommends that weight-loss programs should help dieters learn how to reduce stress in their lives. Also helpful would be more flexible work schedules and exercise programs offered at the workplace.