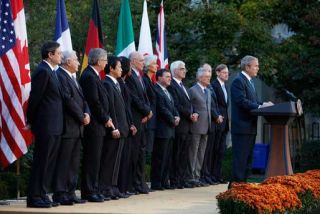 The global financial crisis of 2008 comes as no great surprise to people who study human behavior and decision-making. As with love and sex, financial decisions made by individuals, corporations and governments are emotional and tend toward the irrational.

Couple that with the fact that economies are cyclical, and occasional meltdowns are inevitable, researchers say.

"Our reactions to money, like many other decisions in our lives, are guided in part by intellectual experience and in part by our hearts," said Ellen Peters of Decision Research, which recently polled Americans to learn their level of fear and frustration with the present crisis.

And if history is any guide, this won't be the last great mess we get ourselves into.

James Grant, editor of Grant's Interest Rate Observer, was quoted in The New York Times as also pointing out the irrational side of financial decisions: "People keep stepping on the same rakes because money, like romance, is only partly an intellectual experience. Money, like sex, brings out some thought — but also much heavy breathing and little stored knowledge."

Research backs this up. One of the key irrational mistakes we make over and over is jumping on bandwagons as markets soar or sink.

In one study reported in the Journal of Consumer Research, people were asked to buy and sell virtual stocks that had long histories of either increasing or decreasing earnings. For the most part, subjects bought winners and sold losers, even though any good advisor will say to "buy low and sell high." The bandwagon phenomenon "may explain the hype that surrounds the rapid growth of new products, the escalation in real estate prices in a hot market, and the rise of fads" as well as the insanity of the stock market, wrote Joseph Johnson of the University of Miami and his colleagues.

Irrationality can be explained rather simply: We're only human. Economists have been slow to grasp this fact, however.

"Traditionally, economics has been a lot about how people 'should' behave, explains Anna Dreber, a researcher at Harvard University and the Stockholm School of Economics. "This 'should' was in some cases pretty far from actual behavior. But along came behavioral economics, that has for the last decades led to a more realistic view of human nature in economics, and this subfield has been focusing on how people actually behave."

How we behave is also rooted in how we learn. We learn from either evidence or experience, Peters explained. But we tend to forget experiences that came long ago, which explains why homes get built in 100-year flood plains.

"Recent experience is that the stock market moves inevitably upwards," she said. "Historical data (not very recent), of course, demonstrates that rarely the stock market also goes down considerably, but this gets forgotten as we go about our daily lives."

As we evaluate risk, some very primitive factors take over to drive often-irrational thinking.

"When people make financial decisions, their emotional, primitive brain is very much involved," said Camelia M. Kuhnen, an assistant professor of finance at Northwestern University. "This is not just an intellectual experience."

When we experience a gain, the brain's nucleus accumbens — an area associated with reward — is activated.

Kuhnen doesn't think risk is a bad thing. "It's actually necessary for us to be willing to put up with risk, to engage in searching for resources or a better living environment," she said. But sometimes, as with the crisis now or the irrational exuberance that led to it, "the voice of reason cannot be heard, since our primitive, emotional brain takes over. Panic occurs, or mania, depending on whether we're bombarded with news about losses or about gains."

On a societal or global level, why don't more cautious-minded people balance out those who take foolish risks? In essence, Kuhnen says, people are unwilling to bet against irrationality all the time because they might "simply run of money while betting against the irrational guys."

Plus there are those huge pots of gold at the end of the rainbow.

"Perhaps the reason why we see so much risk-taking even among professional traders and money managers is because the rewards for being at the top are huge, relative to the punishment for being a laggard," Kuhnen said. "Think about mutual fund managers: those who get the highest returns in a year capture a super-sized share of the new inflows into funds, while mediocre performers do not really lose much in terms of assets under management. So risk-taking may be the way to go, given that failure is not that costly, but success is hugely rewarded."

If you are suffering in the current crisis, you might count yourself lucky. Like those who endured the Great Depression, you might actually learn something that sticks.

The simplest lesson:  "Unlike scientific progress, the economy tends to be driven in cycles," says Paul Dholakia, an associate professor of management at Rice University. A widely accepted principle among economists: "If things are good now, it is inevitable that they will be bad later, and vice versa.

But in practice, people make dismal financial decision for a host of reasons, Dholakia explained, including:

Studies have shown we are hardwired to make these mistakes. "In combination, they lead to events like the financial crises," he said.

Amid today's financial carnage, it's worth noting that people who lived through the Great Depression were, as a whole, a frugal generation. They "tend to take less financial risk," said Kuhnen, the Northwestern researcher. But younger generations are there to make the mistakes needed to help fuel economic crises. "These are young folks who have never had strong emotional experiences such as those that we're going through today in the market place. So these new market participants may react in an exaggerated way to good or bad news."

Peters, a psychologist at Decision Research, says that the research evidence demonstrates that as time goes by, even lessons being learned this year will fade. "The greater the temporal distance, the more likely events are to be represented in more abstract images," she said.

William J. Burns, a colleague of Peters at Decision Research, points out that the world of finance is a highly complex system, and policies enacted now can have unpredictable consequences in the future. "As a general rule, when our actions and the effects of our actions are distant in time or space we have difficulty connecting the dots," Burns said.

"If anything, they occur in an accelerated manner, and affect more people more adversely in today's closely linked and networked environment.

Root of all evil

Some say money is the root of all evil. But the smart money bets on an even more evil evil: debt.

Many economists have said the current crisis is an expected result of the vast sums of debt built up in recent decades — by individuals who buy homes with no money down, by the banks that lend far more than they're good for, and by the federal government that just keeps printing more money.

If debt is so dangerous, why do we go into it?

How we got so deep in debt is easy to explain. For individuals, credit cards are one big culprit, explained Miriam Tatzel, a psychologist at Empire State College in New York. For financial institutions, deregulation has been a big enabler. Not required to pack as much cushion, banks and investment houses were able to lend more (predictably, lack of regulation is cited as a reason for the Great Depression, too). For the government, the debt was "kicked upstairs" so as not to burden voters, Tatzel said. As a result, "we owe China."

Other experts have long warned that this situation, in which China and other countries have bought up U.S. assets and debts (more than $14 trillion), held great economic risk.

Why we allowed debt to take over is not so hard to grasp, either. Tatzel gave three reasons:

Social comparison: We get into debt because we need to look good. Related to this is entitlement — you need to have the house, the SUV, the lifestyle because you deserve it and other people like you have it. We 'one up' one another, creating a spiral of consumption and debt."

Unrealistic optimism: People in general believe they will be healthier, have fewer accidents and do better in life than the average person. Risks will turn out OK.

Self-delusion: Maybe it's not as bad as it seems. "They" will find a solution.

So what have we learned?

"It’s a fair bet that government officials and business leaders will handle this crisis more effectively than during the Great Depression, Burns figures. "Personally, many of us will handle our personal finances differently, at least for a while. Unfortunately, as a crisis passes we also tend to forget these lessons as we turn our attention to more current matters."

Tatzel thinks we may now shift in the direction of conserving money and resources in a less materialistic era. "We are like overeaters going on a diet," she said. And for those seeking general happiness in life, she has a financial suggestion based on her research: Be frugal.

"I find that frugal people are more satisfied with life than the less frugal," she said.