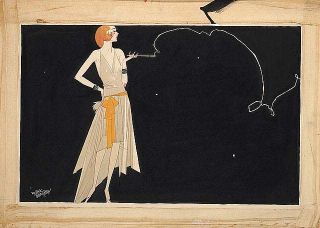 Russell Patterson created images of flappers that earned him wide popular and professional recognition. In this drawing, "Where There's Smoke There's Fire," Patterson depicts a classic beauty of the 1920s lost in revery. The jagged hem of her sleeveless dress and angle of her bent arm play off against the delicate loops of smoke wafting across black space.
(Image: © Library of Congress)

For 10 years, between the destruction of World War I and the misery of the Great Depression, people in North America were actually happy.

With money in their pockets and a renewed sense of optimism after the end of the Great War, Americans and Canadians developed an insatiable appetite as consumers and a newfound appreciation for leisure during the 1920s.

Innovative, mass-produced goods became available for the first time, making some industrialists fabulously wealthy, and the automobile was all the rage. Zipping around town in their new Ford Model Ts, Americans saw their first movies, flocked to live sporting events and swung their fringed dresses — part of a fashion movement characterized by wild costumes — dancing in liquor clubs.

The profound shift in the way of everyday life that occurred during the Roaring Twenties was suppressed for some decades after the stock market crash of 1929, but it was the foundation laid by the 1920s that ultimately propelled the continent into the modern age.

Soon after American and Canadian soldiers came home from the battlegrounds of World War I in 1918, they found a booming economy with plenty of jobs to go around. The transition from wartime to peacetime had been relatively smooth, with a host of new manufacturing plants ready and waiting to build things aside from airplane engines and munitions.

And build they did.

With the ability to mass-produce in place for the first time, commodities that weren't affordable to the middle class before the war suddenly became accessible. Radios (a hot new invention), home appliances and cars, especially, rolled off the assembly line like never before and were snapped up by eager consumers. The explosive popularity of the car during the 1920s, no longer just a luxury for the super-rich, helped transform North American cities into their modern incarnations, historians say.

With more people mobile and mass transit appearing on the scene, the 1920s also experienced a drastic increase in urbanization. The decade saw the rural versus urban population tip in favor of the latter — a trend that has never reversed — as industrial work and a new class of "white collar" jobs beckoned people to the city.

City life in the 1920s was exciting, with the birth of many of the cultural institutions we recognize today.

The cinema became wildly popular in the '20s, especially with the advent of the "talkie" in the later part of the decade. Women, who'd been given the right to vote in the U.S. in 1920, led a fashion revolution imitating the "flapper" style of their favorite screen actresses, and wore their limb-exposing dresses out to dance halls and liquor clubs. Men found their passion in live sports, which exploded in popularity during the 20s, led by superstars such as Babe Ruth and boxer Jack Dempsey.

With everyone gathering in the city, another inevitable by-product of the 1920s was an increase in minority rights relative to the deeply-ingrained prejudices of the late 19th and early 20th centuries. In many parts of the United States, whites and African Americans could be spotted mingling in nightclubs and at the theatre, while gays and lesbians enjoyed a level of popular acceptance not seen again until late in the second half of the century.

While North America effectively shut the door on most immigrants, things for the previously disadvantaged living within its borders generally got better.

The 1920s was the decade that modernized America, according to historians. Popular entertainment, advertising, consumerism and industry matured during the decade, which saw a big increase in liberal attitudes and unabashed frivolity.

An unfortunate side effect of all that was a ballooning economy that suffered from over-optimism, as millions of ordinary Americans invested their new wealth heavily in the stock market, expecting the boon to continue. It did not, bottoming out on October 29, 1929.

The Great Depression burst the economic bubble and reversed many of the social advances made during the 1920s, but the framework for a contemporary North America was already laid.

This article was originally part of a LiveScience series about People and Inventions that Changed the World.