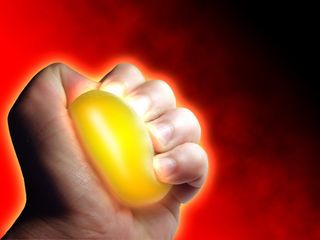 Stress causes deterioration in everything from your gums to your heart and can make you more susceptible to illnesses ranging from the common cold to cancer. Image
(Image: © Dreamstime.com)

If you're worried about your health, stop. You're only making it worse. Stress takes its toll on your body, and new research reveals it is even more dangerous than thought. Stress causes deterioration in everything from your gums to your heart and can make you more susceptible to illnesses ranging from the common cold to cancer, according to a review essay in the Dec. 2007 issue of the Association for Psychological Science's magazine Observer. Thanks to new research crossing the disciplines of psychology, medicine, neuroscience and genetics, the mechanisms underlying the connection are rapidly becoming understood. When an animal perceives danger, a system kicks into gear: A chain reaction of signals releases various hormones — most notably epinephrine (“adrenaline”), norepinephrine and cortisol — from the adrenal glands above each kidney. Norepinephrine has been shown to strengthen neuron connections in a way that seals in memories of emotionally-charged events, perhaps encouraging us to dwell, and stress, over traumatic incidents. These hormones boost heart rate, increase respiration and increase the availability of glucose (cellular fuel) in the blood, thereby enabling the well-known “fight or flight” reaction. Because these responses take a lot of energy, stress simultaneously tells other costly physical processes — including digestion, reproduction, physical growth and some aspects of the immune system — to shut or slow down. When occasions to fight or flee are infrequent and threats pass quickly, the body’s stress thermostat adjusts accordingly: The intestines resume digesting food, the sex organs kick back into gear and the immune system resumes fighting infections. Growing evidence shows that our sensitivity to stress as adults is already “tuned,” so to speak, in infancy, according to the review article. Specifically, the amount of stress encountered in early life sensitizes an organism to a certain level of adversity; high levels of early life stress may result in hypersensitivity to stress later, as well as to adult depression. This is likely because animals raised in chronically adverse conditions (e.g., high conflict, material deprivation) may expect more of the same in the near future, and their bodies must quickly adjust. Some people, and animals, are more prone to stress, research shows. A 2007 study found that mice who tended to stress out produced too much of a certain protein, which apparently caused them to overreact. Besides heart disease, posttraumatic stress disorder and depression, chronic stress has been linked to ailments as diverse as intestinal problems, gum disease, erectile dysfunction, growth problems and even cancer. One study found that people who experience high amounts of stress at work are more likely to develop Type 2 diabetes. Recent research also showed that a stress hormone could cause skin disorders like psoriasis and eczema. Chronic rises in stress hormones have been shown to accelerate the growth of precancerous cells and tumors; they also lower the body’s resistance to HIV and cancer-causing viruses like human papilloma virus (the precursor to cervical cancer in women). According to Stanford neuroendocrinologist Robert Sapolsky, who has studied stress in baboon troops, it is the relative safety from predators and high amounts of leisure time enjoyed by some primates — including humans — that has transformed these useful biological coping mechanisms into a source of pointless suffering and illness.