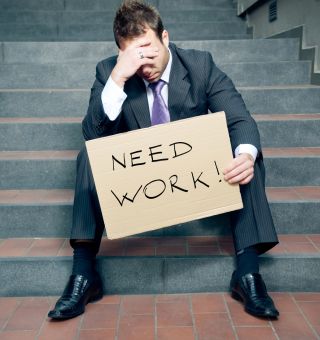 Unemployment can cause a loss of identity and stress.
(Image: © Dreamstime)

Meanwhile, a new study finds all this joblessness doesn’t bode well for the nation’s emotional health.

In its March employment data report, the U.S. Department of Labor noted that more than 45 percent of those who are unemployed have been without work for longer than six months; the average length of unemployment is at a record 39 weeks. And first-time claims for unemployment benefits jumped 27,000 last week to 412,000.

Unemployed workers express a lot of dissatisfaction and unhappiness with their lives, and that unhappiness rises the longer they remain unemployed, according to the new research conducted for the Brookings Institution.

More than 57 percent of those surveyed who were receiving unemployment benefits responded that they were either "not very" or "not at all" satisfied with their life as a whole.

Those feelings of depression are leading more unemployed Americans to look for professional help; the American Psychological Association (APA) reports that psychologists are being called on more than ever to counsel out-of-work Americans. San Francisco psychologist and APA member Robert Chope has counseled the unemployed for more than 30 years. The longer unemployment lasts, he said, the more emotionally drained the jobless tend to become.

“The primary issue [the unemployed] are dealing is the loss of identity,” Chope told LiveScience. “There is this sense of hopelessness.”

Another recent study found that the stress of unemployment is bad for physical health, dramatically raising the odds of early death.

As unemployment drags on, Chope said the unemployed also tend to fall behind in their skill sets, which can lead to frustration and depression.

“Sometimes when they try to go back to work, it’s like they are a generation behind,” he said. “It’s no longer the environment they understood and were comfortable with.”

Chope recommends several tactics that can help the unemployed avoid falling into depression while out of work.

First — though the end goal is often a full-time job — Chope suggests taking a part-time job during the search process.

“At least you will have some money coming in, and you are also creating a network of contacts,” he said. Chope also recommends having a get-together with friends and family to let them know what you’re going through. “People love to help, and they love to be successful in helping,” he said.

Cincinnati psychologist and APA member Kenneth Manges agreed discussing your problems can be helpful — as long as you focus on finding a solution.

“It is healthy, unless it’s a self-pity club,” Manges said. “The discussion needs to lead to some corrective strategy for exploration that they had not considered.”

“Establish a way to reward yourself for making an attempt [at finding a job], as opposed to just when you get the job,” he said.

Chope added it’s critical for the unemployed to create a balance in their life, so that the focus isn’t always on being out of work or the search process.

“I can’t recommend enough that people have some other identity that they can escape to,” he said. “You have to be more active, and you have to really be with other people.”

The study, "Job Search, Emotional Well-Being and Job Finding in a Period of Mass Unemployment: Evidence from High-Frequency Longitudinal Data," was conducted by Alan Krueger of Princeton University and Andreas Mueller of Stockholm University. Its findings were based on a survey of 6,025 unemployed workers who were interviewed every week for up to 24 weeks in the fall of 2009 and winter of 2010.