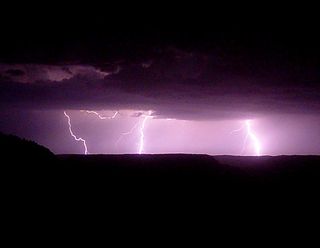 Lightning reaches down from clouds in a step-by-step manner. But scientists don't know exactly how it works.
(Image: © stock.xchng)

Sprites dance high above thunderstorms, but they’re not furtive mythical creatures. They’re quick bursts of electricity that have left atmospheric scientists in the dark about their origins.

The discovery challenges current theories of how mysterious sprites form and could lead to new understanding of atmospheric chemistry. The findings are detailed in this month’s issue of the journal Geophysical Research Letters.

Researchers predicted the existence of sprites as early as 1920, but direct evidence materialized only in 1989, when scientists testing a new low-light camera accidentally videotaped the bursts high above thunderstorms. Since then, atmospheric scientists have learned lightning below storm clouds is responsible for creating sprites above.

“When the lightning strikes, an imbalance of charge forms between the storm cloud and the air above it,” said Hans Nielsen, an atmospheric physicist at the University of Alaska and co-author of the new study. Nature’s way of evening things out, he explained, is a rapid discharge of electricity—a sprite—that can extend as much as 20 miles upward.

In the night sky, sprites can briefly outshine all other objects. “You could, theoretically, see them in daylight,” Nielsen said.

Standard high-speed video can record sprites at 1,000 frames per second (fps), or about 16 times faster than a standard camcorder. But sprites are so transient that they last for only a few frames of even that film, hiding any clues as to how they form.

From the mountains of New Mexico, Nielsen and his colleagues caught sprites in the act.

“We now see them as compact balls of light, shooting downwards, then upwards, at one tenth the speed of light,” Nielsen told LiveScience. “Slower cameras can’t show this. All you see are streaks or tendrils or blurred versions of the balls.”

Nielsen estimates each ball’s size to be as big as a football field but noted other researchers think they are more like the size of a small house. “But until we film one closer up, we can’t know for sure,” he said.

Although the size of the glowing balls might be impressive, their collective energy is surprisingly low, said Alaska University physicist David Sentman, also a study co-author.

“A ball park estimate of the total energy in a ‘typical’ large sprite is one to 10 megajoules,” Sentman said. That's about enough energy to power a light bulb for a day. Still, the energy is released so quickly that Nielsen thinks some yet-to-be-discovered atmospheric chemistry is occurring.

“In footage we see a glowing powder of material left behind, long after the sprite itself is gone,” Nielsen said.

Nielsen thinks this may be freshly formed compounds, such as nitrogen oxides—which eat up ozone gas, but is uncertain what else is produced.

“We don’t yet know if this sprite process is important on a large scale,” Nielsen said. “We may think they’re more like rainbows—just pretty to look at and otherwise insignificant. But could they have big effects down the road? That’s a question we need to answer.”

Video: Sprite’s Balls of Fire The World’s Weirdest Weather The Science of Lightning