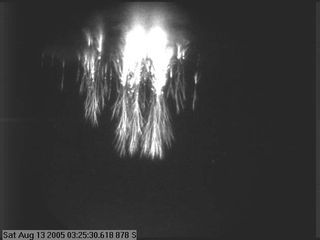 Back in the 1980s, airline pilots were told they must have been seeing things when they reported flashes of light shooting toward space atop thunderstorms.

But in recent years, scientists have photographed the mysterious flashes and come up with interesting names for them: elves, blue jets, tigers and sprites. The flashes are associated with thunderstorms, and each type is incredibly brief and behaves differently.

A new effort has produced the best images and video of sprites ever obtained.

The research, to be detailed Feb. 22 in the online version of the journal Geophysical Research Letters, should help scientists better understand the physics and chemistry of the events.

"By analyzing the high-speed images in sequence, we've been able to clearly define, for the first time, the processes by which sprites develop and what happens inside of them," said Steven Cummer of Duke University. "This understanding of sprite structure is a necessary step to further elucidate sprite dynamics and their possible effects on the upper atmosphere."

Sprites were first imaged, by accident, in 1989, proving that airline pilots were not crazy. In the late 1990s, researchers began to make high-speed videos of the events.

Like lightning, sprites are electrical discharges. They are driven by a strong electrical field above a thunderstorm and so are associated with regular lightning, Cummer and his colleagues reported last year.

The duration of a sprite is literally less than the blink of an eye. They generally occur 20 to 50 miles above a thunderstorm, so spotting them from the ground requires a vantage point away from the clouds.

The new videos, shot last summer from a mountain in Colorado overlooking Kansas and Nebraska, were taken at 5,000 frames per second.

The trickiest part: Because the cameras gather so much data, they could only be turned on when the researchers thought they spotted a sprite.

Over the course of two months, the team captured 66 sprites on seven different nights.

The observations show that sprites normally start nearly 50 miles high. Streamers rain down from the bottom of an initial, diffuse halo. The streamers branch out on the way down. As all this is unfolding in the blink of an eye, a bright column of light expands vertically from the starting point, reaching toward both Earth and space.

Bright streamers then shoot higher into the night.

Bright dots appear. Other researchers have spotted these but nobody knows what they are. The dots glow longer than the rest of the sprite. Some of the dots occur where streamers collide, the new images reveal.

The dots might be important for understanding the chemistry of sprites and how they affect the atmosphere.

"Electrons with enough energy to produce light can also produce interesting chemical species not normally generated," Cummer said. "Such chemicals might be long-lived and could be transported to other locations through the atmosphere."

Future research could yield insight into the connection between sprites and the traditional lightning we see below a storm, Cummer said.