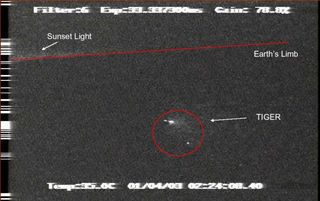 A Transient Ionospheric Glow Emission in Red (TIGER) imaged by the crew of the space station.

If it wasn't enough that the upper atmosphere is full of sprites and elves, now there may be tigers as well.

Researchers reviewing data from the fateful Space Shuttle Columbia mission have identified a strange flash over the Indian Ocean that they have called a Transient Ionospheric Glow Emission in Red, or TIGER, event.

The unusual discharge was recorded on Jan. 20, 2003 by the Israeli astronaut Ilan Ramon, using an infrared video camera from the Mediterranean Israeli Dust Experiment (MEIDEX).

Less than two weeks later Ramon and the rest of the crew were lost during the shuttle's reentry.

The discovery of the bright infrared flash was part of the MEIDEX sprite campaign. Sprites are jellyfish-shaped emissions that occur above thunderstorms. These and other lightning-related phenomena - like blue jets and elves - are called transient luminous events (TLEs).

When airline pilots first reported seeing them decades ago, scientists were skeptical that they were seeing real, natural phenomena.

Although many questions remain concerning these high-altitude flashes, the TIGER event sets itself apart from the typical TLE by its shape and the fact that it was not directly related to any thunderstorm activity.

On the night of the TIGER event, the closest lightning strike was more than 600 miles (1,000 kilometers) away and occurred almost a quarter of a second before the bizarre flash recorded by the Columbia shuttle.

In comparison, sprites tend to occur about 30 milliseconds after cloud-to-ground lightning, at an average distance of 24 miles (40 kilometers) from the strike.

The MEIDEX sprite campaign recorded 17 other TLEs, all of which were easily classified. The researchers, therefore, contend that the emission on Jan. 20 was entirely new - and not simply a delayed sprite.

"The major point of this research, in my mind, is to show that there are some upper-atmosphere processes that we do not know enough about," said Yoav Yair from the Open University of Israel. "The best way we can monitor or research this properly is from space."

Yair and his colleagues ruled out the possibility that the TIGER event was a reflection of another flash, since the sky was clear above Madagascar that particular night.

Although the flash could have been caused by a meteor burning up in the atmosphere, the research team said that no trail of light - as would be expected - can be seen in the video images.

One final hypothesis is that a possible thunderstorm in Cyprus around the same time may have caused an electron beam to travel along the Earth's magnetic field to create a purple glow over Madagascar. The authors do not believe the storm in Cyprus was strong enough to accomplish this, however.

With no viable explanation, the scientists contend that an entirely new beast needs to be studied.

The results were published Jan. 18 in Geophysical Research Letters, a journal of the American Geophysical Union.