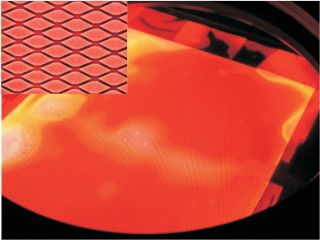 Photograph of an aluminum foil lamp having a radiating area of 225 square centimeters. The inset is a magnified view of several diamond-shapes microcavities.
(Image: © University of Illinois at Urbana-Champaign)

Researchers at the University of Illinois at Urbana-Champaign made the low-cost lamps by treating aluminum foil bought at the grocery store with an acidic bath. The new light source, which is lighter, brighter, and more efficient than incandescent light, is described in the June issue of the Journal of Physics D: Applied Physics.

"We wanted to make this technology as inexpensive as we possibly could," said physicist Gary Eden. "Expensive technology can be interesting, but the opportunity for using it is limited."

Eden's team is just one of many around the world working on more efficient, longer-living, mercury-free alternatives.

Thomas Edison's light bulb legacy is more than a hundred years old, and has remained essentially unchanged since its incandescent inception. The slightly younger fluorescent tube contains low amounts of mercury, which accumulate into hazardous levels in landfills.

"There's not a suitable alternative right now, but hopefully there will be soon," said Eden.

The alternative light source developed by Eden and colleagues is built of foil bathed in acid so that its surface is full of tiny holes. The acid also converts the foil into sapphire, a type of aluminum oxide, which creates a robust structure that allows volts to travel across the thin layer of aluminum without breaking it down. The tens of thousands of cavities are filled with gas and wired together, and the whole device is sealed between two pieces of glass or something similar.

All assembled, the device is less than 1 millimeter thick, and most of that girth comes from the glass. The light can be flexible and hang on curved surfaces. Because aluminum is lightweight, the light is also.

The flexible lamps not only have potential to light up homes and businesses, they may help treat diseases too.

Doctors at Massachusetts General Hospital have shown interest in using the light source as a treatment for psoriasis, a skin disease suffered by 5 percent of the world's population. Although there is no cure for the condition, ultraviolet light of certain wavelengths can drive it into remission. Currently, treatments are costly, and can require a few visits to the doctor every week.

"What we are envisioning is a phototherapeutic bandage sold over the counter," Eden told LiveScience. "Someone with the disease could go to the pharmacy, purchase the flexible lamps in a sanitary wrapper. They'd attach it around the affected area of their body with Velcro, plug it in, watch a movie, tear off the light, and throw it away. In another 4 or 5 weeks, they'd buy a new one."