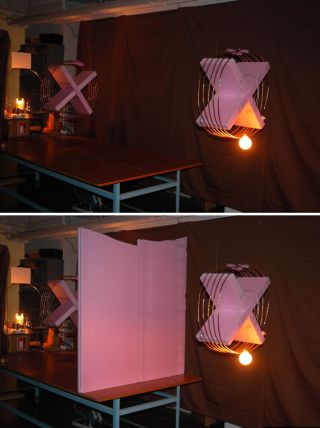 60W light-bulb being lit from 2m away. Note the obstruction in the lower image.
(Image: © Science)

Power cables and even batteries might become a thing of the past using a new technique that can transmit power wirelessly to cell phones, laptops, MP3 players, household robots and other electronics. Scientists lit a 60-watt light bulb from a power source seven feet away with their new technique, with no physical connection between the source and the appliance. The researchers have dubbed their concept "WiTricity," as in "wireless electricity." MIT physicist Marin Soljacic began thinking years ago about how to transmit power wirelessly so his cell phone could recharge without ever being plugged in. Scientists have pursued wireless power transmission for years— notably, eccentric genius Nikola Tesla, who devoted much energy toward it roughly a century ago. The problem with wireless power transmission is that broadcasting energy in all directions—say, as radio waves—can be tremendously wasteful, with a vast majority of power ending up squandered into free space. One could imagine focusing energy along just one or a few directions—say, using laser beams—but such approaches can readily prove dangerous and cumbersome, requiring an uninterrupted line of sight between the source and device as well as sophisticated tracking systems on the device if it is mobile. (Scientists have proposed beaming power from orbital solar power stations to Earth for years.) Soljacic and his colleagues devised WiTricity based off the notion of resonance. One well-known example of resonance can be seen when an opera singer hits the right note to cause a champagne glass to resonate and shatter. Two objects resonating at the same frequency tend to exchange energy efficiently, while interacting weakly with objects not resonating at the same frequency. Instead of sound, the MIT physicists focused on magnetic fields. Most common materials interact only very weakly with magnetic fields, so little power would get wasted on unintended targets. "The fact that magnetic fields interact so weakly with biological organisms is also important for safety considerations," said Soljacic's colleague, MIT physicist Andre Kurs. In their latest work, the scientists designed two copper coils roughly 20 inches in diameter that were specially designed to resonate together. One was attached to the power source, the other to a light bulb. The practical demonstration of their earlier theoretical work managed to power the light bulb even when obstacles blocked direct line of sight between the source and device, findings detailed online June 7 in the journal Science. "In the past, there was no great demand for such a system, so people did not have a strong motivation to look into it," MIT researcher John Joannopoulos said, who also worked with Soljacic on the project. "Over the past several years, portable electronic devices, such as laptops, cell phones, iPods and even household robots, have become widespread, all of which require batteries that need to be recharged often." Kurs added their work could reduce dependence on batteries, "which are bulky, expensive and contain toxic elements." For laptop-sized coils, the researchers said power levels more than sufficient to run a laptop can be transferred over room-sized distances efficiently and in nearly all directions. "As long as the laptop is in a room equipped with a source of such wireless power, it would charge automatically, without having to be plugged in," said MIT researcher Peter Fisher, also part of the research team. "In fact, it would not even need a battery to operate inside of such a room." One should be able to adjust the system so that as more receivers are added, the power transferred to each remains constant. The experimental setup radiates roughly five watts when transmitting 60 watts over a distance of more than seven feet. "This is equivalent to the power radiated by a few cell phones," Kurs said. "It is possible to drastically reduce the power radiated." The researchers demonstrated roughly 40 percent efficiency in power transfer. Kurs told LiveScience they are currently working on improving the efficiency of the power transfer as well as the maximum distance allowed. "For the moment, we are focusing on power transfers on the order of 100 watts although, in principle, more power could be transferred," he added. Imperial College London physicist John Pendry, who did not participate in this study, said, "This really presents the prospect of having truly portable devices that don't have power cables trailing behind them, which is very exciting." When it comes to what the future holds, Soljacic said, "Once, when my son was about 3 years old, we visited his grandparents' house. They had a 20-year-old phone and my son picked up the handset, asking, 'Dad, why is this phone attached with a cord to the wall?' That is the mindset of a child growing up in a wireless world. My best response was, 'It is strange and awkward, isn’t it?' Hopefully, we will be getting rid of some more wires, and also batteries, soon."