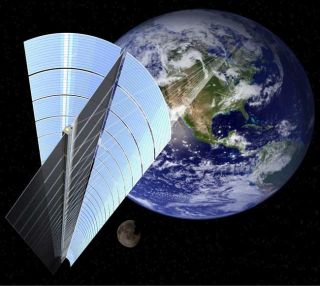 An artist's impression of what JAXA's Space Solar Power System might look like if it used laser transmission to beam solar power down to Earth.
(Image: © JAXA)

Placing solar panels in space above both night and clouds was first considered 40 years ago. But the estimated cost was, in a word, astronomical.

The idea, however, has seen a resurgence, thanks to rising oil prices and advances in solar technology. A report from U.S. Defense Department found that space-based solar is technically feasible and economically viable.

To help prove the point, the Air Force Academy recently announced plans for a small demonstration satellite that would beam down a meager, but still significant, 0.1 watts of solar power.

"Our vision is to build the world's first-ever space-based solar power system to light a single bulb on Earth and in so doing light the path for business to follow," said Col. Michael "Coyote" Smith of the Air Force.

The type of transmission beam is still not decided, but the project may benefit from separate research in Japan that has been studying the two most likely technologies: microwaves and lasers.

In the full light of space

The sun puts out more than 10 trillion times the energy currently being consumed by the whole world.

"We would only need to tap into a small fraction of that to get all our energy now and in many years to come," said Mark Hopkins, senior vice president of the National Space Society, which recently formed an alliance with other non-profits to promote space-based solar.

The advantage of going to space is that sunlight is constant up there and three to 13 times stronger than the average down here on Earth, Smith said.

The first suggestion of a solar power satellite was in 1968, but early estimates put the price tag around $1 trillion, largely because astronauts would have had to construct the facility back then.

Now robots can do the job, installing improved-efficiency solar cells in a modular fashion, for 100 times cheaper than before.

"If you decide to go now with today's technology, you're talking about the same cost as ground-based solar," Hopkins said, which is around 30 cents per kilowatt-hour.

That's still too high, according to Hopkins, but he thinks costs will continue to come down, especially if development dollars start coming in. The Pentagon-sponsored report offered a roadmap for how to build a 10-megawatt test satellite over the next 10 years for $10 billion.

But where that money will come from is hard to say. According to Hopkins, NASA sees this as an energy application and the Department of Energy sees this as a space enterprise.

"There are bureaucratic problems finding a home for this project," he said.

The Japanese space agency, JAXA, has been providing steady support over the past decade for their Space Solar Power System (SSPS). The goal is to launch a geostationary satellite by 2030 that could supply 500,000 homes on Earth with a gigawatt of power.

Currently, JAXA researchers are looking at both microwaves and lasers as possible options for beaming the energy down.

"The technology for microwave transmission is more advanced, since it is based on current communication satellites," said Susumu Sasaki, a manager at JAXA's Advanced Mission Research Group.

But to transmit huge amounts of power in a focused beam, the transmitting antenna in space needs to be roughly 2 kilometers (1.2 miles) wide. A receiving antenna of similar size or bigger must be built on Earth.

The alternative would be a laser. Japanese scientists have been working on metal alloy plates that can absorb sunlight and directly convert it into an infrared laser beam.

The advantage is that the transmitting and receiving devices can be about 10 times smaller than for microwaves, Sasaki said. Lasers also do not carry the risk of interfering with communication networks that use microwaves.

However, lasers cannot go through clouds like microwaves can, so about half of the beam energy is lost if lasers are used.

Another problem is that a laser-beaming satellite sounds like a weapon, even though Hopkins thinks there would be ways to ensure that it never gets used in such a way.

In contrast, microwave transmission is too low of intensity to be considered dangerous. A person could safely walk across where the targeted beam hits the Earth, according to Hopkins.

"You would feel it as some extra warmth, like on a sunny day," he said.

Smith said that both microwaves or lasers were being considered for the Air Force project, which was announced earlier this month at the International Space Development Conference.

"Although our architecture is far from decided, we have adopted the mantra keep it cheap and simple and deliver it soon," he said.

They plan to stay under $10 million with a 400-pound (181-kilogram) satellite in low Earth orbit. It may be able to piggyback on another mission and use inflatable solar arrays. Smith hopes it will launch in 2010.

"We want to get this rolling," he said.