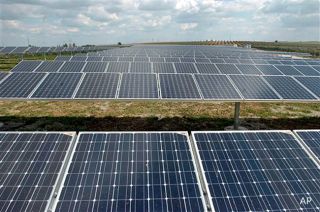 A field of solar cells.
(Image: © The Associated Press)

Now futurist and inventor Ray Kurzweil is part of distinguished panel of engineers that says solar power will scale up to produce all the energy needs of Earth's people in 20 years.

There is 10,000 times more sunlight than we need to meet 100 percent of our energy needs, he says, and the technology needed for collecting and storing it is about to emerge as the field of solar energy is going to advance exponentially in accordance with Kurzweil's Law of Accelerating Returns. That law yields a doubling of price performance in information technologies every year.

Kurzweil, author of "The Singularity Is Near" and "The Age of Intelligent Machines," worked on the solar energy solution with Google Co-Founder Larry Page as part of a panel of experts convened by the National Association of Engineers to address the 14 "grand challenges of the 21st century," including making solar energy more economical. The panel's findings were announced here last week at the annual meeting of the American Association for the Advancement of Science.

Solar to compete in five years

Solar and wind power currently supply about 1 percent of the world's energy needs, Kurzweil said, but advances in technology are about to expand with the introduction of nano-engineered materials for solar panels, making them far more efficient, lighter and easier to install. Google has invested substantially in companies pioneering these approaches.

Regardless of any one technology, members of the panel are "confident that we are not that far away from a tipping point where energy from solar will be [economically] competitive with fossil fuels," Kurzweil said, adding that it could happen within five years.

The reason why solar energy technologies will advance exponentially, Kurzweil said, is because it is an "information technology" (one for which we can measure the information content), and thereby subject to the Law of Accelerating Returns.

"We also see an exponential progression in the use of solar energy," he said. "It is doubling now every two years. Doubling every two years means multiplying by 1,000 in 20 years. At that rate we'll meet 100 percent of our energy needs in 20 years."

Other technologies that will help are solar concentrators made of parabolic mirrors that focus very large areas of sunlight onto a small collector or a small efficient steam turbine. The energy can be stored using nano-engineered fuel cells, Kurzweil said.

"You could, for example, create hydrogen or hydrogen-based fuels from the energy produced by solar panels and then use that to create fuel for fuel cells, he said. There are already nano-engineered fuel cells, microscopic in size, that can be scaled up to store huge quantities of energy, he said.

The NAE panel thinks that meeting the energy challenge and the other grand challenges of the 21st century is "simply imperative to our survival on the planet," said panel member Charles Vest, former president of MIT and current NAE president. Other challenges that the panel addressed include providing access to clean water , engineering better medicines, reverse engineering the brain, securing cyberspace and enhancing virtual reality.

The inspiration for the report was a previous NAE that reflected on the engineering achievements of the 20th century, such as the automobile, aircraft, jet aircraft, rockets, missiles, satellites, radio, radar, television, nuclear power, nuclear weapons, the computer, internet, genetic engineering and antibiotics.

These inventions gave us the green revolution that improved food production as global population grew, the distribution of safe water and electricity, improved health and generated an improved standard of living for many in the world.

However, now the world faces some dark consequences of these advances, said Stanford University's William Perry, a member of the Grand Challenges panel and a former Secretary of Defense in President Clinton's administration, including the depletion of prevailing energy resources, a looming global environmental disaster in global warming, the emergence of drug-resistant bugs and the threat of a security disaster if nuclear and biological weapons fall into the wrong hands.

With this in mind, the NAE brought together the panel (other members included Segway inventor Dean Kamen, biomedical engineer Robert Langer, former National Institutes of Health Director Bernadine Healy and genomics pioneer Craig Venter) to report on the needs of society and how technology can meet them.

Other tech solutions suggested by the NAE panel to the new century's big challenges include:

Perry was optimistic about the ability of society to arrive at these solutions, saying the achievements of the 21st century "will I believe be just as spectacular as achievements of 20th century."

"This idea [of solving large-scale problems using technological innovation] is being developed in the context of a globalized world," he said. "Even though the proposals have been developed in the United States, the challenges themselves that humanity faces are global in character."

The NAE invites feedback on the document.