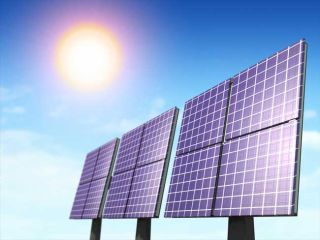 Solar energy is the light alternative to a carbon-rich energy diet, and it may be the only renewable energy that can significantly reduce greenhouse gas emissions, engineers say.

"Wind can play some role, as can biofuels and geothermal, but they are all too small," said Erin Baker of the University of Massachusetts Amherst. "The three really big players are solar energy, nuclear power and carbon capture and storage ."

Over the course of a day, the amount of energy in sunlight striking the continental United States is more than 2,500 times the amount of the nation's daily electricity consumption. Despite this potential, solar power is far behind other renewables, making up just 0.07 percent of the U.S. energy portfolio, according to the Department of Energy.

"Solar energy would have to provide 20 percent of the energy supply to have a climate change impact," Baker told LiveScience. "We'd like it to be more than that."

In a report released earlier this year, Baker and her colleagues looked at the technologies that might bring solar out into the full light.

Solar panels contain photovoltaic cells that turn light into electricity without releasing any greenhouse gases. One of the attractive features of solar panels is that they can be relatively easily added to a home, as opposed to the bigger construction projects typically associated with wind turbines or other energy-gathering setups.

Almost all cells in current use are made of silicon. Although silicon is abundant in sand, it must be processed to make it usable in solar cells and computer chips. In fact, the current high demand from the electronics industry for silicon wafers has caused a shortage of high-grade silicon, which means the solar industry could have even more trouble trying to become competitive.

For a typical home's electricity needs, the cost of solar panels is several tens of thousands of dollars. Over the lifetime of the panels, this works out to about 30 cents per kilowatt hour, three times what most utilities charge.

To reduce this price, much of the current engineering effort is focused on making solar cells from thin films that either use less silicon or replace it with other photovoltaic materials. Baker said that many experts think this should be the first goal of research and development.

"We could fund a lot of people to look for other materials," she said.

Solar on the horizon

There are other ideas as well, such as organic solar cells based on cheap, flexible plastic. However, organic cells are currently inefficient at converting sunlight into electricity, and what's worse, said Baker, "they tend to fade and breakdown in the sun."

Some researchers are working on future "third generation" solar cells, which could employ a number of new technologies, such as lenses, chemical dyes, multi-layer cells or tiny quantum dots that trap more of the incoming sunlight.

But even if highly efficient solar panels could be made cheaply, they can't make electricity at night or on a cloudy day.

"The biggest problem for solar is the intermittency of supply," Baker said.

For solar to be a major energy provider, there will need to be better electricity storage. Giant flywheels or improved batteries could help smooth out the power flow.

None of the technological options are sure to work, so Baker thinks policy makers and the solar industry should fund research into several possibilities, much like a diversified stock portfolio.

"You don't invest all your money in Google; instead you buy 10 or 100 different stocks," she said.

Interestingly, Google just announced plans to invest tens of millions of dollars next year in the development of a gigawatt of power from renewables, enough to supply roughly a million households. One of the companies selected by Google is eSolar Inc., which specializes in solar thermal power.

Solar thermal is different from photovoltaic technology, in that the sun's energy is focused to boil water or another fluid. The resulting steam can then be used to turn a generator as is done in traditional coal or nuclear power plants.

Although seemingly less direct than solar panels, solar thermal converts roughly 30 percent of the sun's energy into electricity, which is twice the efficiency of most silicon-based solar cells. Moreover, some of the heat can be stored and used at night to keep the electricity supply more constant.

Several concentrated solar power plants have been built using this technology in places such as Spain and the Mojave Desert. The required sun-tracking mirrors are far too unwieldy to ever conceivably go on a person's roof, but similar systems could be used to provide warm water for a home.