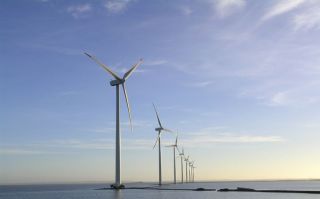 Towering wind turbines have become the symbol of renewable energy, but the literally high profile of wind energy may be its biggest drawback.

"It really kills the view to have mile after mile of wind turbines," said Howard Hayden, a retired physicist and renewable energy skeptic who distributes The Energy Advocate, a monthly newsletter.

At least 260,000 turbines, each 300 feet tall, would be required to meet the United States' electricity needs.

"To me, the number is pretty small," said Cristina Archer of Carnegie Institution for Science in Stanford, Calif., who sees a wind turbine as less pollution and less imported oil.

She and a colleague previously showed that the world's wind energy potential is 35 times the global energy demand. They have now shown that wind energy can provide the stable power supply that its critics have said it cannot.

"It is the nature of the wind to gust and lull," Archer told LiveScience, and this can cause fluctuations in the electricity that is generated.

However, a large network of interconnected wind farms could stabilize the supply, the team reports in the November 2007 issue of the Journal of Applied Meteorology and Climatology.

The wind is a result of uneven heating of our atmosphere by the sun. In fact, 2 percent of the sun's energy reaching earth is converted into making the wind blow.

A wind turbine cannot theoretically extract all the energy from the air that moves through it, but most modern wind turbines can capture about 50 percent.

For more than 1,000 years, windmills have used wind to lift water and grind grain. The first wind turbine to produce electricity was built in 1886, but it wasn't until 1980 that the wind industry really started to take off.

In the United States, wind energy has grown by 22 percent over the past five years, thanks in large part to government subsidies. There are now more than 11,000 megawatts of wind power installed — enough to supply 3 million homes, according to the American Wind Energy Association.

Still, wind only makes up 0.7 percent of the country's electricity supply. Archer thinks this contribution could conceivably be as high as 20 to 30 percent.

Hayden thinks such a high fraction of wind energy would cost taxpayers too much, as well as cause havoc to the power grid.

"Wind has its place because it does save fuel," he said. "But it should not be more than 10 percent of the electricity supply."

The problem is that a turbine's output strongly depends on the wind speed. For example, if the wind cuts its speed by half, the power drops by almost 90 percent.

This can lead to wild fluctuations that are intolerable to the grid, which must maintain a certain voltage and frequency for consumers' ongoing demands.

Archer and her collaborator looked at ways to smooth out the wind supply by averaging over several sites.

"Chances are that it's windy somewhere," she said.

The researchers looked at wind data from the central Midwest and found high variability thanks to the collision between cold winds from Canada and warm winds from the Gulf of Mexico.

By connecting 19 wind farms in a 500 by 500 square mile area, the network could supply reliable "baseload" power at more than a third of the network's average output.

Hayden is skeptical. "We don't have a grid system to do this," he said, and constructing new transmission lines will cost about a million dollars per mile.

Archer disagrees. "The main issue is not technological, but political since this network would have to cross utility boundaries," she said.

She mentioned a plan to build a similar type of network in the North Sea that would connect offshore wind farms.

Wind in your backyard

Offshore wind is an attractive idea because the wind is stronger and steadier at sea. But a recent plan to build the first U.S. offshore wind farm off Cape Cod, Mass., has been fought by those who don't want it to spoil the view.

There are also those who complain that wind turbines are noisy and kill birds and bats.

"The environmental concerns are subtle but far-reaching," Hayden said.

Archer thinks the alternatives — coal and nuclear — are worse. Recent surveys have found that the worries about wind farms are largely imagined, since people living near them don't seem to mind them, she said.

"People fought the building of the Golden Gate Bridge, claiming it would ruin the landscape," she said. "Now it costs more to have a house with a view of the bridge."