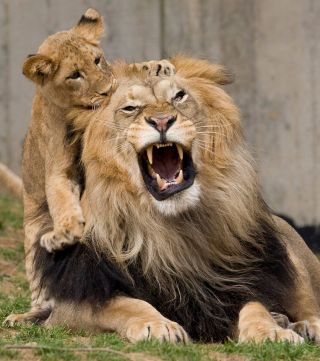 The Smithsonian Zoo's lions did react to the earthquake, but went back to their routines within minutes of the shaking, while other animals were more irritated by the quake, sending out alarm calls and hiding.
(Image: © Smithsonian's National Zoo)

People along the East Coast weren't the only ones to feel the 5.8-magnitude earthquake Tuesday, as zoo animals in Washington, D.C., let it be known they felt the vibrations, zoo officials said.

Some of the animals at the Smithsonian’s National Zoological Park even shouted alarm calls or ran up trees seconds before the rest of us felt the shaking.

About 5 to 10 seconds before Tuesday's quake, an orangutan named Kyle and a Western lowland gorilla named Kojo, abandoned their food and climbed to the top of the treelike structure in the Ape House exhibit.

The prequake jitters are not uncommon among animals, with stories and even some science to back them up, suggesting some animals can sense the seismic waves before they do any Earth-shaking.

When the quake did hit, Mandara, a gorilla at the zoo, let out a shriek and collected her baby, Kibibi, before moving to the top of the tree structure. In a sign of extreme irritation, Iris, an orangutan, began belch-vocalizing just before the quake. She continued making this noise, indicating annoyance, following the quake as well. [Read: Can Animals Predict Earthquakes?]

Some of the zoo's small mammals seemed to have gotten the temblor memo even earlier. The red ruffed lemurs sounded an alarm call about 15 minutes before the quake and then again just after it occurred. And the poor black-and-rufous giant elephant shrew hid in its zoo home, refusing to come out for an afternoon snack.

Meanwhile, the snakes, including the poisonous copperheads and cottonmouths, which are typically inactive during daylight, writhed during the quake.

Some of the animals seemed to think a dip in the pool was in order: Just as zookeepers were feeding the beavers and a duck species called hooded mergansers, the quake struck. The ducks immediately jumped into the pool, while the beavers first stood on their hind legs before following suit.

Others huddled. The zoo's flock of 64 flamingoes gathered into a group just before the shaking and remained cozy during the quake. The zoo's lions were more grounded, standing up and facing the zoo building, which rattled during the earthquake, before settling down within minutes.

Predicting an earthquake is notoriously difficult, with scientists in the field saying that even with the advances they've made, the day we'll be able to actually know an earthquake is about to strike is still very far away.

Even so, it seems animals like those at the zoo Tuesday may have some prescience. In fact, a study released last year showed that common toads (Bufo bufo) abandoned their breeding grounds five days before an earthquake struck L'Aquila, Italy, in April 2009; they didn't return for days after the temblor.

Stories have circulated of various animals with seismic foresight, including birds flying in odd directions and dogs showing signs of restlessness hours to days before an earthquake hits.

While the shaking disrupted routine activities for many animals at the Smithsonian zoo, one animal seemed oblivious — the giant pandas didn't seem to respond at all to the shaking, keepers said.

All the animals at the Smithsonian zoo are safe, and after closing its doors to incoming visitors yesterday, the zoo was reopened this morning on time.

When asked about the animal behavior before and during the earthquake, Wildlife Conservation Society (which operates several New York zoos, including the Bronx and Central Park Zoos) spokesperson Stephen Sautner said they didn't notice any odd activity.