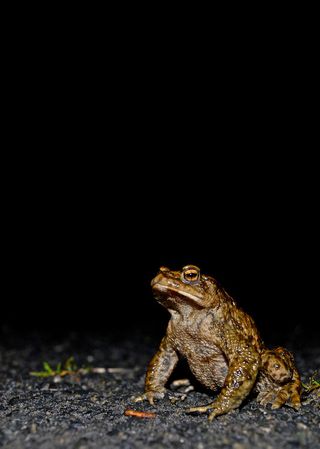 The Common European Toad (Bufo bufo), a species that has a large distribution range in Europe.
(Image: © Bert Willaert)

Predicting an earthquake is notoriously difficult, yet before the ground shakes, some animals reportedly jump into action, from birds flying in unusual directions to dogs becoming restless during those pre-quake hours to days.

Most of these tales, however, aren't backed up by scientific data, until now. Breeding toads might be able to notice subtle changes in the environment before an earthquake, allowing them to flee the scene and hop to safety, according to a new study announced today.

The study researchers found that common toads (Bufo bufo) abandoned their breeding grounds five days before an earthquake struck L'Aquila, Italy, in April of 2009. The toads didn’t return for a few days after the tremor, something they almost never do.

The team also found that disturbances that occurred in the upper atmosphere before that quake correlated with the toads' movements.

"It's the first time that any study has really documented unusual behavior before an earthquake in a scientific and methodical way," lead study author Rachel Grant, a zoologist from The Open University in the U.K., told LiveScience. "We did it properly and scientifically, and consistently looked at behavior."

The team was studying the effect of the lunar cycle on the toads, which only breed during one month a year in a shallow pool on an Italian lakebed, when they noticed the seismic behavior. Over a 29-day period, Grant and her colleagues had been watching the toads at their breeding site, and got the opportunity to see them before, during, and after the quake.

Five days before the earthquake, after spawning had just begun, the number of male toads at the site decreased by 96 percent. Six days after the last significant aftershock, the toads came back and produced the rest of their spawn.

"So they had two spawning periods, which is really unusual," said Grant.

Toads are highly sensitive to weather changes, yet no odd weather occurred before the earthquake that would have led to the exodus of toads from their breeding grounds. What did change, however, were the Earth’s magnetic field and the amount of radon gas in the groundwater, which the planet’s crust burped out before the earthquake.

The researchers aren’t sure which factor might have caused a disturbance in the upper atmosphere that was detected using very low frequency (VLF) radio sounding. Whatever the cause, the toads' reactions suggest the amphibians can sense the difference and take action to protect themselves.

An earthquake detector could be particularly beneficial to toads, which move slowly and so can take hours or even days to find an area that won't be affected by a flood or a mudslide. And postponing their breeding to avoid the disaster could result in greater reproduction success, said Grant.

"I was really surprised because I wouldn’t think that earthquakes would be that dangerous to toads, but the fact that they disappeared indicates that they are," said Grant.

Determining the exact reason for that response, however, would be extremely difficult because no one knows when earthquakes will happen. The knowledge that toads can anticipate them, however, could prove beneficial in the future, said Grant.

"One day there could be a system involving amphibians as an early earthquake predictor in combination with other seismic indicators," she said.

The study is detailed in a recent issue of the Journal of Zoology.