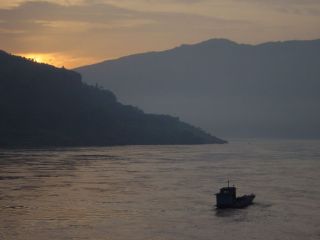 Sunrise over the gorge on the Yangtze River in China.
(Image: © stock.xchng. No usage restrictions.)

Running from its source in Tibet eastwards across China and emptying into the East China Sea through the delta at Shanghai, the Yangtze River is the longest river in Asia and third longest in the world.

The Three Gorges Dam was completed earlier this decade to provide flood control and hydroelectric power. At five times the size of the Hoover Dam, it is the largest hydroelectric dam in the world.

Since the creation of the dam, sediment that would usually flow along with the river and be deposited in the delta is being blocked.

A new study, detailed in the May 17 issue of the journal Geophysical Research Letters, found that the dam had retained 151 million tons of sediment since it began operation, reducing the amount of sediment flowing into the delta by about 31 percent.

As a result, erosion has been a major problem downstream, because there is no incoming sediment to replace what the waters wash away. The loss of sediment decreases the nutrients needed for agriculture and animals that thrive in the area, and diminishes the land on which millions of Chinese people live.