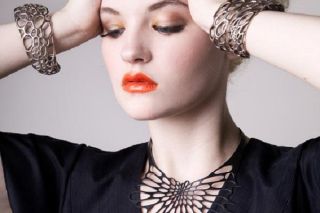 NEW YORK – This past weekend, a colorful parade of fashionistas, hipsters and major label talent scouts descended on Williamsburg, Brooklyn, to take in the annual Renegade Craft Fair. While ironic T-shirts and various bird-laden accessories continue to dominate the Fair's offerings, items with scientific content have grown into a significant portion of the companies on display.

Over the last few years, the solidification of geek chic, the emerging trend of architecture students entering into jewelry design and a general interest in science as a means of connecting with the natural world has produced a consumer base covetous of science-related fashion.

"I really think it started when there was a movement towards a woodsy, lumberjack kind of thing. Almost comically pastoral, because people in the city want to feel close to nature, because this is New York City, and we’re deprived of it, and when people in New York want to get close to something, they consume it," said Erica Weiner, who designs and sells jewelry with science themes and natural history components. "Then it became this whole Native American thing. It started kind of ironic, but it represents an actual desire to be closer to something that means something. Somehow this crossed with a whole science geeky, get a telescope and look at the stars, earth science and astrophysics thing. People want to get in touch with nature, and science is a way of doing that. Now it’s more like science project kind of stuff."

The style and substance of the accessories vary significantly from designer to designer. Weiner, for instance, sells necklaces made from pieces of the Campo del Cielo meteorite or jewelry that is cast from fossil ammonites. She also sells a necklace with a self-contained terrarium ecosystem, inspired by an item from the science museum gift shop that she worked at as a teenager. Other incorporate anatomical drawings into their prints, or produce biomimetic jewelry with fractals that looks like coral or leaves.

The architect and the jeweler

While Weiner fell in love with science during her childhood years, many of the other designers leading the science chic pack came to fashion through a desire to utilize their technical architecture training in a more creative way. This shift has brought a level of technical rigor and interest in science to a field previously dominated by more humanities-oriented art students.

"We were always interested in bringing our training to bear on jewelry. Some of the pieces in our collection look strikingly similar to the designs I made as an architectural student. The products give us a way to spread those concepts to a wider audience," said Jessica Rosenkrantz, co-founder of the jewelry company Nervous System. Rosenkrantz studied biology and architecture at MIT, and started the company with her boyfriend, who majored in mathematics at MIT.

Weiner's friend Elena Coleman Howell also started as an architect, but upon realizing that she could design fashion pieces like Weiner's in the 3-D modeling program CAD, switched to making jewelry. Within a year of starting, Howell teamed up with Disney to produce a line of jewelry based on the movie "Tron: Legacy." Rosenkrantz also designs all of her pieces on the computer, writing her own programs that produce patterns reminiscent of biology.

Beauty is for everyone, but does science only sells to scientists?

These science-inspired fashion lines have garnered the attention of the admittedly minute segment of the research and engineering community that possesses even a modicum of fashion sense. This, in turn, has led to a greater emphasis on scientific accuracy from designers fearful of losing cred amongst the very people that inspire them.

"The anatomical drawings have been a challenge, because medical people are totally willing to come up to your booth and tell you you're wrong. But I do my homework, and you have to nail it. I am not a science person at all, so I do considerable research. I would never want to be caught with my pants down," said Sara Selepouchin, founder of the illustration and screenprinting business Girls Can Tell. Selepouchin also studied architecture before she started producing personal and home accessories, many of which sport anatomical diagrams or engineering schematics.

However, whether or not the mass of consumers responsible for feeding this trend fully understand the technical content of their purchases remains up for debate. Many of the designers themselves freely admit that scientific meaning per se does not ensure sales.

"I don't think when they’re buying jewelry if they think about the process. They just think 'hey, this looks cool,'" Weiner told InnovationNewsDaily.

The failure of many consumers to fully comprehend the intricacies of these pieces may ultimately end up preventing this growing trend from emerging out of the proverbial indie ghetto and into the mainstream. However, given the global reach of Internet sales, the fact that the Renegade Craft Fair travels across the United States and the weight national retailers such as Urban Outfitters and American Apparel give to the trends they spot at this and similar exhibitions, these increasingly popular science-themed fashions will at least get a fair shot at the big time.