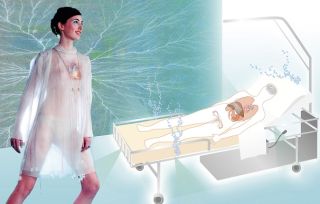 NEW YORK — These futuristic clothes stink. No, literally — they smell, and they do so in a way that may forever change your relationship to fashion. Wired to emit specially designed aromatherapy fragrances that can alternatively evoke memories, enhance alertness or increase calmness, the concept of a wardrobe dubbed Smart Second Skin apparel could radically transform your daily sensory environment into a tool for fighting Alzheimer’s disease or simply changing moods.

Speaking at the Humanity + Transhumanism conference held here last weekend, Jenny Tillotson, a senior research fellow in Fashion and Textile Design at the University of the Arts, London, detailed how a scent-augmented wardrobe could alter the wearer′s mind for the better.

″Based on the sense of smell embedded this in the clothing, I’m trying to redesign the future through smell,″ Tillotson said. ″Mood-enhancing effects can have an impact of behavior, learning; it’s a hot wire to the brain. You could use scent to train the nerves and brain to help you wake up in the morning, go to sleep at night, keep you alert in the office.″

The clothing imagined by Tillotson would incorporate tiny tubes throughout the lining of a garment. The wearer could set a timer so that the shirt or dress would emit invigorating scents such as a smelling salt in lieu of morning and late afternoon coffee, and then release calming, floral fragrances in the evening for decompression during the commute home.

Even more reactive, the clothing could connect to biometric sensors that track the wearer′s heart rate or stress levels. The clothing could then relax the user during stressful situations, or record ambient scents for later replication during happier moments. And like insects, who communicate and perceive the world primarily through their sense of smell, clothing that both emits and receives scents could allow wearers to talk, find or remember each other purely through the smell of their wardrobe.

On the more medical side, scented clothes could help elderly minds stay sharp. According to Tillotson, smell provokes memory more directly than any other sense, and the deterioration of the sense of smell during the aging process speeds along dementia in the elderly. By linking scent sensors and fragrance emission, clothing could replicate smells associated with loved ones, cherished activities or places. Pumping up those smells could trigger an elderly wearer's memory and allow them to more easily remember how to get home or the name of an acquaintance.

Tillotson first became inspired to create a scent wardrobe when working with HIV-related charities. The so-called smell of death in hospitals has an obvious negative effect on the mood of chronically ill patients, and something as simple as the smell of fresh flowers can positively alter their mood, speeding recovery. Taking a cue from the scent communication of insects, Tillotson imagined a personal perfume bubble that would follow the patients around.

Right now, the technology remains purely conceptual, so it might take some time before bespoke suits or wedding gowns practice scent-based mood enhancement. But with Tillotson quickly working out the fundamentals of dynamic scent clothing, the future promises to be a whole lot smellier.