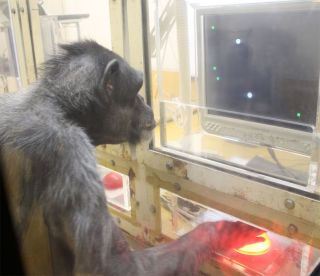 A female chimp was trained to hit green rectangular targets on a touch screen with the cursor.
(Image: © © Primate Research Institute, Kyoto University)

Chimps playing a video game can apparently recognize which characters they control, a feature of self-awareness that could shed light on the evolution of the self in humans, researchers said.

The concept of the self -- the awareness that one exists as an individual distinct from others -- is a key aspect of the human mind, but much remains unknown about how it originated and evolved. However, the discovery that a range of animals can recognize themselves in mirrors, including apes, elephants, dolphins and even monkeys, suggests they might help us find out how our self-awareness came to be.

One aspect of the self is known as self-agency -- the feeling that we each control our own actions. To see if the ability existed in chimpanzees, humanity's closest living relatives, scientists in Japan used a test developed for schizophrenia patients, who at times feel that they are not in control of their own actions, that they lack self-agency.

Three female adult chimpanzees were trained move a white cursor on a touch screen by rolling a trackball. The aim was to hit green rectangular targets with the cursor.

"At the beginning of training, we had no idea how to train chimpanzees to use this device," said researcher Takaaki Kaneko, a comparative psychologist at Kyoto University in Japan. "Sometimes, we lay completely down on the floor to make the chimpanzees pay attention to the trackball."

Researchers then presented the chimps with two identical white cursors -- one that they controlled and one they didn't. The movements of the cursor outside each ape's control were based on recordings of how each performed on the game in the past, to make this activity seem as much like the chimp's as possible. If the chimpanzees, after hitting a green target with a cursor, identified which cursor was theirs by touching it on the screen, they received a small treat of apple bits or raisins.

The chimps scored correctly 99 percent of the time, researchers found. "I personally believed that chimpanzees perceive self-agency in a similar way to which we humans do, and we have experimentally proven that here," Kaneko told LiveScience. [Read: Chimps Decipher What Others Are Thinking]

When the researchers added slight delays between trackball motions and cursor responses or tilted the angle at which the cursor moved compared to how the chimp rolled the trackball, chimp performance degraded significantly at the game, doing even worse than one might with random guessing. Kaneko suggested chimp self-agency differs from ours, potentially disrupted by several different factors to which humans do not pay much attention."How exactly we human and chimps differ is a next step to study," he said. "To understand the evolution of the human mind, we need to compare related species."

Kaneko and his supervisor Masaki Tomonaga detailed their findings online May 4 in the journal Proceedings of the Royal Society B.