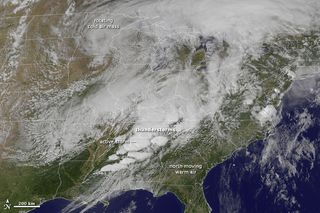 For the first time in three years, an EF-5 tornado — the highest ranking on the tornado damage scale — has struck the United States. The EF-5 tornado touched down in Smithville, Miss., on April 27, the National Weather Service (NWS) confirmed today.

After reviewing the damage, the NWS office in Memphis, Tenn., upgraded the tornado that hit Smithville to an EF-5, with winds of up to 205 mph (330 kph), said John Sirmon, of the NWS Memphis office. Entire neighborhoods in Smithville, population 882, were blown away by the twister, Sirmon said.

"They took a direct a hit," Sirmon told OurAmazingPlanet. "Catastrophic damage is the way I would describe the damage." [The Tornado Damage Scale in Images]

The last time an EF-5 struck was on May 25, 2008, in the Parkersburg-New Hartford area of Iowa. That monster storm killed nine people.

This latest twister is the first F-5 (on the old tornado strength scale) or EF-5 tornado in Mississippi since 1966.

The EF-5 was part of a massive tornado outbreak on April 27 across the Deep South. More than 130 reported tornadoes may have claimed 300 or more lives in six states. The historic tornado outbreak is likely the deadliest in nearly 40 years.