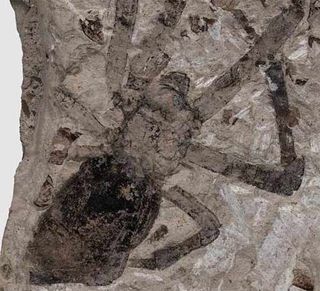 The largest fossil spider uncovered to date once ensnared prey back in the age of dinosaurs, scientists find.

The spider, named Nephila jurassica, was discovered buried in ancient volcanic ash in Inner Mongolia, China. Tufts of hairlike fibers seen on its legs showed this 165-million-year-old arachnid to be the oldest known species of the largest web-weaving spiders alive today — the golden orb-weavers, or Nephila, which are big enough to catch birds and bats, and use silk that shines like gold in the sunlight.

The fossil was about as large as its modern relatives, with a body one inch (2.5 centimeters) wide and legs that reach up to 2.5 inches (6.3 cm) long. Golden orb-weavers nowadays are mainly tropical creatures, so the ancient environment of Nephila jurassica probably was similarly lush. [Image of fossil spider]

"It would have lived, like today's Nephila, in its orb web of golden silk in a clearing in a forest, or more likely at the edge of a forest close to the lake," researcher Paul Selden, director of the Paleontological Institute at the University of Kansas, told LiveScience. "There would have been volcanoes nearby producing the ash that forms the lake sediment it is entombed within."

Spiders are the most numerous predators on land today, and help keep insect numbers in check. So these findings help us "understand the evolution of the insect-spider predator-prey relationship," Selden said, suggesting that golden orb-weavers have been ensnaring insects and influencing their evolution since the Jurassic Period. [Read: Ancient Spider Guts Revealed in 3-D]

"There were many large or medium-sized flying insects around at that time on which it would have fed indiscriminately," Selden said.

In modern golden orb-weaver species, females are typically much larger than males. This new fossil was a female, suggesting this trend stretches back at least as far as the Middle Jurassic, Selden said — that is, back before the first known bird, Archaeopteryx, or giant dinosaurs such as Brachiosaurus and Diplodocus.

Although this is the largest fossil spider known to date, it is not the oldest. Two species from Coseley, England, Eocteniza silvicola and Protocteniza britannica, both come from about 310 million years ago.

Selden and his colleagues are now investigating other fossil spiders from China, "as well as those from elsewhere in the world — currently Brazil, New Zealand, Australia, Italy and Korea," he said.

The scientists detail their findings online April 20 in the journal Biology Letters.