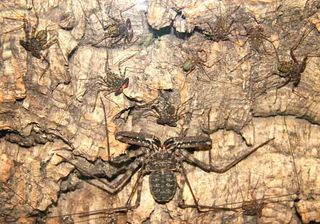 In a display of family tenderness, a mother amblypygid sits with her seven-month-old offspring. The arachnidsâ€™ whip-like legs are touching one another.
(Image: © Linda Rayor/Cornell University)

While not usually considered paragons of tender, familial love, some spiders do have a touchy-feely side. ?Scientists have discovered two arachnids that caress their young and snuggle together.

Social behavior is extremely rare in arachnids, a group of critters typically defined by their aggression, clever hunting methods and even predatory cannibalism.

"This was the best example I had ever seen of friendly behavior in an arachnid," said lead study author Linda Rayor, a Cornell University entomologist.

"I was amazed at how incredibly interactive the groups are," Rayor said. "They are in constant tactile contact with one another. They are constantly exploring one another and interacting with their siblings."

Rayor and her colleagues studied two whip-spider species, dime-sized spiders common in Florida, called Phrynus marginemaculatus, and a much larger species found in forests and caves in Tanzania and Kenya, Damon diadema.

The species are members of an arachnid group called amblypygids. Unlike their eight-legged relatives, the amblypygids have just six walking legs because the first pair of "ancestral" legs evolved into whips for sensing their environments.

The whip-like feelers, which can extend three to six times the length of the arachnids, can rotate 360 degrees around their bodies and are covered with fine hairs capable of delicate tickle movements.

Observed in glass houses, the two arachnid families were often seen engaging in sibling-sibling and mother-baby interactions. In one experiment, the siblings were removed from a familiar cage and placed randomly into a large unfamiliar cage. Within minutes, they gathered back together.

Mothers of both species nurtured their young. Often, the mama whip spider would sit in the middle of her offspring and slowly stroke their bodies and whips with her own feelers.

For P. marginemaculatus, the stroking was mutual, with the three-week-olds also whip-caressing their moms and one another.

Whereas amicable behavior continued into adulthood for P. marginemaculatus, teen life was rougher for D. diadema. After these arachnids reached sexual maturity, the scientists found evidence they had outgrown their cuddly behavior: adolescent spiders had missing or injured legs attributable to fighting.

Rayor suggests the social behavior of these spiders has remained hidden due to their reclusive behaviors. The creatures often shimmy their flat bodies into narrow crevices in caves and other hideouts. Plus their coloring blends them in with their environment.

Past studies have focused on the more visible features, such as the adult's courtship displays and fighting behaviors, so scientists had assumed the creatures were solitary and cannibalistic predators.

By living in such tight families, the spiders could boost safety from predators, particularly in the case of a mom protecting her young from hungry passersby. Groups might also benefit by sharing prey for meals, though Rayor has yet to observe such a family feast.

The study is detailed in the August issue of the Journal of Arachnology.