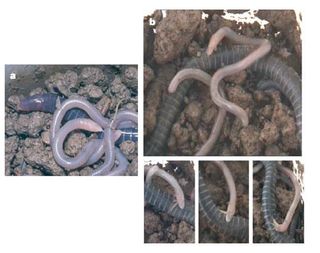 Many amphibian moms provide their young with an egg yolk nutrient sac and then take off, leaving the kids to fend for themselves.

Now scientists have found the world's most doting amphibians: mothers that let offspring eat the skin off their backs [Video].

Brooding Bolengerula taitanus moms transform their skin into a nutrient-rich meal for developing offspring. The youngsters squirm all over mom's body, peeling off the outer layer of skin with special teeth.

Scientists say this form of feeding, which doesn't hurt the mother unless the offspring get overly aggressive, is analogous to mammal lactation and better prepares newborns for life on their own.

In the first week of feeding, the worm-like critters' total body length increase by about 11 percent at an average rate of 0.04 inches per day (1 millimeter).

The meals take a toll on mom, though—she weighs 14 percent less at the end of the week.

By the time the offspring become independent, they resemble miniature adults.

There are several benefits to this style of maternal care. Mothers save the large energy investment it takes to produce egg yolks. They also have the flexibility to delay providing food, or not provide any at all, if environmental conditions aren't favorable.

And although these creatures produce fewer offspring than other amphibians, their young are larger and stand a better chance of survival, study coauthor Mark Wilkinson of the Natural History Museum in London told LiveScience.

Instead of laying eggs and feeding offspring externally, more advanced members of this amphibian group—called caecilians—give birth to live young. These offspring gain nourishment by eating the insides of the mother's womb-like organ. The new finding could provide a plausible intermediate step in the evolution from egg-laying to live-bearing amphibians.

The study is detailed in the April 13 issue of the journal Nature.