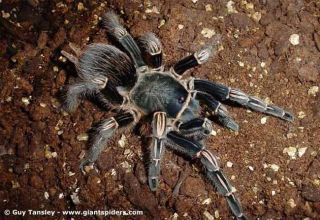 Spinning silk comes second-nature to tarantulas, with uses ranging from protecting their eggs to lining and concealing their nests.

Now scientists have discovered another silken tool used by a tarantula from Costa Rica. The zebra tarantula [image] produces silk secretions from tiny nozzle-like structures at the tips of its feet [image]. The substance helps the spiders stick to vertical surfaces, ensuring a slip-free trek up a steep wall.

"I was completely surprised to find that some spiders have tarsal silk," said research team member Cheryl Hayashi of the University of California, Riverside.   "This research is a great example of how much there is still to discover in the world around us."

The new finding puts a new spin on ideas about the evolution of spider silks, forcing scientists to reconsider which came first—the silk-producing structures on a tarantula's abdomen or the foot spinners.

"Spiders are famous for their ability to spin silk from their abdominal spinnerets.  But, it was previously unknown that any spider could make silk from their feet," Hayashi told LiveScience.

This is what scientists have known: Inside a tarantula's body a silk-spinning factory is hard at work. Special glands whip up batches of silk proteins made from chains of amino acids. The proteins are mixed into a watery solution before being funneled through looping ducts that lead to openings called spinnerets on the outside of a tarantula's abdomen. The spinnerets act like valves to control the thickness of silk strands.

Each tarantula produces five or six types of silk for various uses.

When a spider began to slip, it would send out strands of silk from nozzles at the ends of its eight legs. The tethers put the brakes on the spider's descent, leaving behind what looked like a series of "footprints" consisting of dozens of thin, silk fibers with diameters 10 times smaller than human hair.

Tarantulas like this one also have thousands of microscopic hairs on each foot that generate molecular forces between the surface and the spider's feet. Plus, foot claws can latch onto rough surfaces for an added adhesive.

But during the lab walk, the zebra tarantulas neglected these sticking tactics in favor of the silk stamps from their feet.

The results are detailed in the Sept. 28 issue of the journal Nature.

With a newly revealed use and production of silk, the scientists wonder if the original function of spider silk was to increase traction or whether it evolved after the silk-spinning spinnerets.

"This discovery opens up new avenues of research into how both types of spider silk function and might have evolved," Hayashi said.

Hayashi expects the silk-making glands in the tarantula's feet are similar to those in the abdomen. Following the spider's footsteps, the scientists are now in the process of characterizing these silk glands.