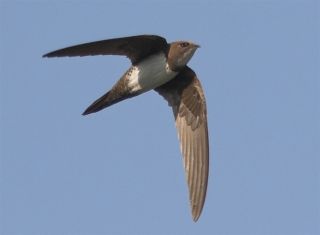 Alpine swifts spend most of their time in flight. Their swept-back wings resemble a crescent and span 22 inches (55 centimeters) across.
(Image: © Graham Catley, Nyctea Ltd (http://www.nyctea.co.uk/menu.html))

Just as siblings may scuffle over who gets the front seat or access to the TV remote control, some bird siblings jostle for position in their nests.

Those with winning moves can sit in the spot where mom is most likely to deliver food.

For Alpine swift birds, which build nests on tall buildings or holes in cliffs, this sibling rivalry can also mean a nasty fall from the nest. A new study found the more crowded the nest the more likely nestlings would battle with siblings and risk a lethal fall.

When parents flutter back to the nest with an insect meal, often the Alpine swifts nudge one another in an effort to be first in line. The more mouths there are to feed, the more likely one sibling could be left hungry.

So does a crowded nest mean more pushing and shoving? To find out, Pierre Bize of the Institute of Biomedical & Life Sciences at the University of Glasgow and Alexandre Roulin of the University of Lausanne, Switzerland, monitored Alpine swift nests built under the roofs of clock towers in Bienne and Solothurn, Switzerland.

The scientists altered the brood sizes so that each nest held between one and four nestlings. Every day, the researchers counted the number of birds in each nest, and placed any wandering birds back into their natal nests.

Siblings get the boot

The nestlings reared in packed quarters fell out of their nest more frequently than those in less crowded nests, Bize said. He suggested the nest falls are related to the health condition of the nestlings, with those in crowded homes showing a poorer body condition.

“We think that weaker nestlings compete more intensely, and in turn take more risks by trying to intercept parents that arrive with food at the entrance of the colony where the risk of falling is high, Bize told LiveScience.

On the upside, Bize said the high cost of this sibling competition—a lethal fall—also means the babies probably won’t fake being hungry. There’s no “crying wolf,” because the result could be deadly.

The findings detailed in a recent issue of the journal Animal Behavior.