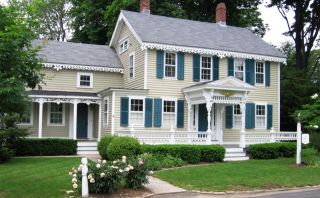 With tax day quickly approaching, many Americans will take advantage of one of the largest federal tax breaks — the mortgage interest deduction.

A new study, however, suggests reforms are needed if the tax break is to serve its intended purpose for everyone. The deduction, designed to encourage homeownership, actually is having the opposite effect in some parts of the country, according to economist Tracy Turner, an economics professor at Kansas State University.

Turner’s study, based on household data collected from 1984 to 2007 by the Panel Study of Income Dynamics, showed that in denser, urban cities with limited available housing, the deduction has a negative impact because it both reduces homeownership and inflates housing prices.

"It's just driving up prices, which makes it harder to come up with the down payment," she said.

Believing in the theory that homeowners have more of a stake in the success of their community, Turner noted it’s those urban areas where homeownership is needed the most to improve the community as a whole.

Ted Gayer, a senior fellow at the Brookings Institution, agreed with the study's conclusions.

"If the goal is to promote home ownership, it is a poorly targeted policy," Gayer said. "The criticisms are right in that it is a benefit only to the higher tax bracket."

According to Gayer, the mortgage interest deductions lowered tax revenue by about $86 billion in 2009, and are expected to lower tax revenues by nearly $500 billion from 2010 through 2013. However, of the nearly $86 billion, about 75 percent was accrued by those making more than $100,000.

Reforms to the mortgage interest deduction policy are currently being explored by members of Congress.

A policy proposed by the President's Commission on Fiscal Responsibility and Reform calls for replacing the mortgage interest deduction, which is only available to those who itemize their taxes, with a non-refundable credit available to all taxpayers. The credit would equal 12 percent of interest payments on up to $500,000 of mortgage debt on principal residencesonly.

"I thought it was a good proposal," Gayer said. "A tax credit seems like a sensible way to go about it."

"It doesn't matter if you itemize or not," he said. "If you are a homeowner, you would get a credit."

The commission’s proposal is still being debated in Congress. In December, thecommission voted 11-7 to support the proposal, but that fell short of the 14-vote margin needed to mandate congressional action.

Christian Hilber, a professor at the London School of Economics in the U.K., contributed to the study, which is being revised before journal publication.