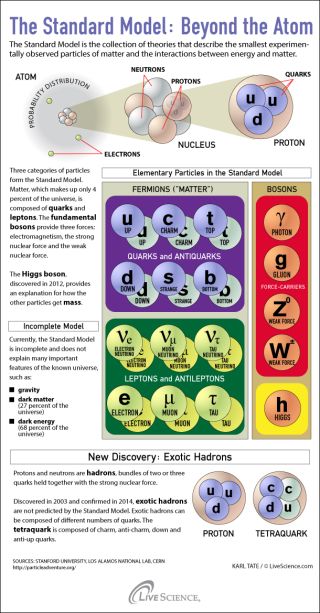 See how the Standard Model sorts out the major particles that make up the universe.
(Image: © Karl Tate, Livescience.com Infographics Artist)

The Standard Model is the collection of theories that describe the smallest experimentally observed particles of matter and the interactions between energy and matter.

Three categories of particles form the Standard Model. Matter is composed of quarks and leptons. The fundamental bosons provide three forces: electromagnetism, the strong nuclear force and the weak nuclear force. Gravity, the fourth fundamental force, is not explained by the Standard Model. The Higgs boson, discovered in 2012, provides an explanation for how the other particles get mass.

The quark group includes six particles including: up, down, charm, strange, top and bottom.

The bosons include the photon, gluon, Z particle, W particle and the Higgs.

Currently, the Standard Model is incomplete and does not explain many important features of the known universe, such as:

• dark matter (27 percent of the universe)

• dark energy (68 percent of the universe)