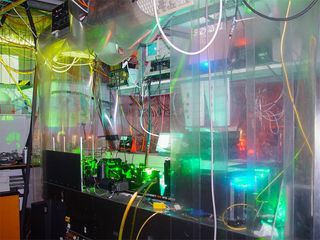 Part of the laser system used for measuring the shape of the electron.
(Image: © Joe Smallman )

The electron, against predictions, appears to be perfectly round, raising questions about one of the fundamental building blocks of the universe.

An electron's shape refers to that of the cloud of so-called virtual particles thought to surround a dimensionless point. Scientists have predicted this cloud would be slightly aspherical as a result of the pull from its positive and negative poles.

"If we were to expand the electron up to be the size of the solar system, then we've measured its shape accurate to less than the width of a human hair," Hudson told LiveScience.

Among the questions the finding raises is why the universe doesn't contain equal portions of electrons and their rarer antimatter counterparts, called positrons. [The Coolest Little Particles in Nature]

Scientists think electrons themselves are point-like objects lacking any height, width or depth whatsoever. Meanwhile, the seemingly empty space that surrounds the electron is "teeming with pairs of particles and antiparticles that fleet in and out of existence — so-called 'virtual particles' — so modern physics sees the electron as inseparable from the cloud of virtual particles that surrounds it," Hudson explained.

While precisely measuring this cloud is beyond the capability of modern methods, scientists have predicted it to be very nearly, but not precisely, a sphere. An electron could be thought of somewhat like a tiny battery, complete with positive and negative poles, and this pull from opposite poles in principle would warp the cloud's form.

Although this distortion would be extraordinarily minute, the consequences would be on a cosmic scale. For instance, this aberration could explain "why the universe seems to be made of almost entirely matter and no antimatter," Hudson said. "The current theories of physics predict that there should be roughly equal amounts of matter and antimatter."

If the electron weren't round, it might behave differently from the positron, which would offer a possible explanation to the riddle of antimatter. Any difference could explain why matter seems more prevalent than antimatter.

The standard model of particle physics currently predicts that any distortion in an electron's shape is far too small to detect, being some 100 billion times beyond the sensitivity of current experiments. However, "almost all physicists believe that our current theory of particle physics isn't the be-all and end-all," Hudson said.

For instance, modifications to the standard model are needed in order to potentially explain what dark matter ? that invisible, as-yet-unidentified component that makes up about 85 percent of all matter in the universe ? might be. Many of these modifications, such as a theory known as supersymmetry, suggest electrons should be far more warped in shape than the standard model suggests.

How to measure an electron

The researchers' experiments involved firing pulses of ytterbium monofluoride molecules between electrified plates. The scientists then used lasers to measure how the molecules twisted within these electric fields to deduce the shape of their electrons. They monitored 25 million such pulses.

"The difficulty is that we're trying to measure such a tiny effect," Hudson said. "To put it in context: If you think hard and your neurons fire, they generate an incredibly tiny magnetic field. This magnetic field is big enough to distort an electron's motion to the extent that our experiment is spoiled."

As such, they had to extensively shield their instruments against magnetic fields, including the use of metal shielding and custom lab equipment that doesn't generate magnetic fields.

Although their measurements suggest the electron is spherical, "there is still wiggle room — the electron could be very slightly distorted, and with our level of accuracy we would not have observed that distortion," Hudson said.

"The implication of our work is that the standard model of particle physics has not been disproven yet, and the theories that go beyond it have been constrained, but not yet disproven either."

For instance, the new measurements put strong limits on one of the more popular theories to extend the standard model, supersymmetry, he said.

The scientists are already at work to improve their precision further.

"The result is exciting because we're finding out something new about one of the basic building blocks of matter," Hudson said. "The results shed light on new theories of particle physics."

Hudson and his colleagues detail their findings in the May 26 issue of the journal Nature.