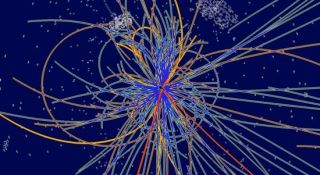 The world's most powerful atom smasher will continue to run through the end of 2012, with a brief stop for technical reasons at the end of January 2011, officials announced today (Jan. 31).

Meanwhile, scientists smashing protons together at nearly the speed of light announced they are getting closer to narrowing the search for dark matter, that invisible stuff that can be detected only by its tug on normal matter.

The Large Hadron Collider (LHC) is a 17-mile-long (27 kilometer) underground ring run by the European Organization for Nuclear Research (CERN) near Geneva, Switzerland. There, scientists are crashing matter's building blocks together in the hopes of revealing even smaller building blocks —  undiscovered particles that make up our universe, including the theoretical "God particle," which is thought to give other particles mass.

And then there's dark matter. The energy released in proton-proton collisions in the LHC manifests itself as particles that fly away in all directions. While most collisions produce known particles, on rare occasions new, exotic ones may be produced, including those known as supersymmetric particles, or "sparticles." The lightest sparticle is a natural candidate for dark matter, researchers say.

To search for these sparticles, an LHC detector looks for collisions that produce two or more high-energy jets, or bunches of particles traveling in approximately the same direction, and significant missing energy.

"We examined some 3 trillion proton-proton collisions and found 13 'SUSY-like' ones, around the number that we expected," said Oliver Buchmueller, of the Imperial College London, but who is based at CERN. "Although no evidence for sparticles was found, this measurement narrows down the area for the search for dark matter significantly."

Buchmueller and colleagues look forward to the 2011 run at LHC, which is expected to bring in data that could confirm supersymmetry as an explanation for dark matter.

"If LHC continues to improve in 2011 as it did in 2010, we've got a very exciting year ahead of us," said Steve Myers, CERN's director for accelerators and technology. "The signs are that we should be able to increase the data collection rate by at least a factor of three over the course of this year."

For instance, in November 2010 scientists began crashing heavy lead ions together in the LHC, dubbing such crashes "little Big Bangs," as they are likely to create conditions closer to the beginning of the universe than ever before (but, of course, on a smaller scale). And later in the month, such super-energetic collisions did create a primordial state of matter akin to what existed at the dawn of the universe.

And, in fact, scientists think 2011 may be the year they find the Higgs boson, or God particle.

The LHC was scheduled to run to the end 2011 before a long break to prepare it for running at its full-design energy of 7 teraelectron volts (TeV). Currently, it's running at half that power – 3.5 TeV.

That's because the cables connecting the superconducting magnets that propel the particles around the LHC ring were built with a flaw that was revealed shortly after the machine was first turned on. In order to ramp up the power, LHC workers will have to shut down the accelerator and make significant repairs to the magnet connectors.

Once that's done, and LHC is running at peak design parameters, particles will be colliding at a mind-blowing 600 million events per second. For comparison, about 6 million particles currently collide per second.

The schedule announced today foresees beams back in the LHC next month and running through to mid-December, then a short technical stop over the year before resuming in early 2012.