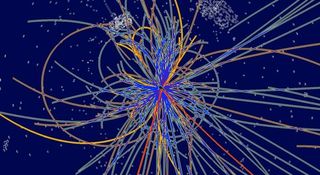 Number one on many scientists' 2011 to-do list is to find the Higgs boson — a particle so important to science that it's been dubbed the "God particle."

This fundamental particle, thought to give mass to all particles, has been theorized since 1964, but never detected. That, however, could soon change.

"If nature is kind to us we will find it next year," particle physicist Christoph Rembser told LiveScience. [Related: Science Breakthroughs Predicted for 2011]

Where is this confidence coming from?

Rembser works at the European Laboratory for Particle Physics (CERN) in Geneva, where the world's largest atom smasher, the Large Hadron Collider, went online in September 2008.

Part of the motivation for building this behemoth machine (its underground ring spans 17 miles, or 27 kilometers, in circumference) was to find the Higgs boson.

The particle was first theorized when scientists wondered why some particles are more massive than others. The Higgs boson is associated with the so-called Higgs field, a lattice of sorts thought to fill the universe, and the two (the field and the boson, or particle) are thought to be responsible for giving other particles mass. Rembser explained how they work with an analogy:

Imagine a large room full of people. When a celebrity walks in and tries to make her way to the bar at the other end, she makes slow progress because she is hindered by the crowds around her, all leaning in to catch a better glimpse.

The celebrity would be akin to a massive particle that is dragged down by the Higgs field. Alternately, a lightweight particle would be like an average Joe walking through the room — because the crowd (the field) would take little notice of him, he'd be able to move more freely.

While many scientists hope the Higgs mechanism holds the missing puzzle piece to complete the existing "Standard Model" of physics that describes the known particles, it must be verified.

Because the LHC is the largest particle accelerator ever built, it is able to accelerate particles to higher speeds, and then crash them into each other at higher energies, than ever before. As Einstein's famous E=mc2 equation tells us, energy can be converted into mass (and vice versa), so the more energetic the collisions, the more massive the resulting new particles can be.

Scientists can't be sure exactly how massive the Higgs particle is, if it even exists at all, but most models place it in a range that should be reachable by the LHC.

"At least we have got everything in hand," Rembser said. "We have got the accelerator and the detector to find it. Everything is set up to measure and observe it. But now it's of course nature who has to decide whether the Higgs will be very often produced or is a rare animal to find. So in this sense we have to wait."