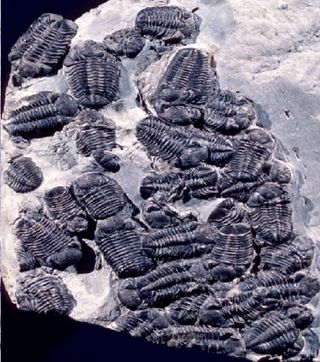 A group of trilobites fossilized after being trapped in mud in what is now western New York.
(Image: © Carlton Brett)

These findings, which will be presented March 20 at the Geological Society of America regional meeting in Pittsburgh, help show how social these ancient beasts were.

Trilobites are extinct distant relatives of lobsters, spiders and insects that died off more than 250 million years ago, before the dinosaurs even came into existence. They prowled the seas for roughly 270 million years, longer than the Age of Dinosaurs, and new species of trilobites are unearthed every year, making them the single most diverse class of extinct life known.

Trilobites, like other arthropods, shed their hard exoskeletons from time to time in order to grow larger. They appeared to have gathered in large groups for safety in numbers when they molted their armor, just like modern crabs and lobsters.

Moreover, trilobites seem to have used these gatherings as opportunities to mate, just like many of their distant living relatives do. Preserved together are large groups of similar-sized and therefore similarly aged trilobites, separated by species; they may have reproduced essentially "naked" after molting.

"The fact that you can find this in many different places and ages among many different species of trilobites suggests that this behavior might have been pretty general to the entire group, and that it likely began fairly early on in the evolution of trilobites," Brett told LiveScience.

"There were different groups segregated by species at these sites, yet they all seemed to be molting in synchrony — this is something we see today in modern marine animals as well," Brett said. "They may have spawned in response to some external trigger from the environment, such as a new moon tide in a particular season of the year."

Graduate student Adrian Kin of Jagiellonian University in Krakow, Poland, also recently discovered long chains of more than a dozen trilobites arranged head to tail in 360-million-year-old rocks in the Holy Cross Mountains of Poland. This seems to be evidence of another behavior seen in their living relatives — migration. [Related: 10 Incredible Animal Journeys]

"The recent discovery of rows of more than a dozen specimens provides the oldest evidence of migratory queues similar to those seen in modern crustaceans," Brett said.

"These trilobites were blind, eyeless," Brett added. "They lived in relatively deep and probably no-light zones. They were probably relying on their tactile senses to literally keep in touch with each other as they migrated."

These cases of mass burials may have occurred when runoff from hurricanes propelled tons of mud over the trilobites. These catastrophic deposits smothered the creatures so rapidly that they were delicately preserved in the last positions they held when they were alive, essentially recording snapshots of their behavior much the way ancient Roman life was recorded at Pompeii by volcanic ash.

"We find trilobite beds that we can trace across distances of 80 miles (130 kilometers), all the effect of a single event," Brett said. "The numbers of individuals caught in those must easily be in the billions. These were probably extraordinarily rare events in terms of human scales, but on the grand scale of geological time, you can have a number of these extraordinarily bad days that record these amazing glimpses into what the lives of ancient organisms were like."

Brett and his colleagues Kin and Brenda Hunda will detail their findings March 20.