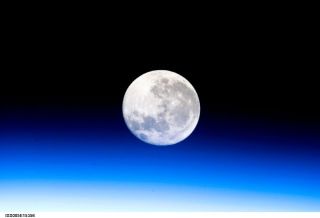 A full moon is visible in this view above Earth's horizon and airglow, photographed by Expedition 10 Commander Leroy Chiao on the International Space Station.
(Image: © NASA)

The tragic earthquake and tsunami in Japan Friday (March 11) set the Internet abuzz with the idea that the moon, which will be at its fullest of the year on March 19, played a role in the devastating natural disaster.

The seed for the idea was planted by an astrologer, who contended that this large full moon – a so-called "supermoon"– would touch off natural disasters like the Japan earthquake since the moon would make its closest approach to Earth in 18 years. Scientists, however, dismissed the notion entirely and now a top NASA scientist is weighing in. [Japan Earthquake and Tsunami in Pictures]

In a statement released Friday, noted NASA scientist Jim Garvin explains the mechanics behind the moon's phases and the causes of the supermoon. Garvin is the chief scientist at NASA's Goddard Space Flight Center in Greenbelt, Md.

"'Supermoon' is a situation when the moon is slightly closer to Earth in its orbit than on average, and this effect is most noticeable when it occurs at the same time as a full moon," Garvin wrote in the NASA statement. "So, the moon may seem bigger although the difference in its distance from Earth is only a few percent at such times." [Photos: Our Changing Moon]

"It is called a supermoon because this is a very noticeable alignment that at first glance would seem to have an effect," Garvin explained. "The 'super' in supermoon is really just the appearance of being closer, but unless we were measuring the Earth-Moon distance by laser rangefinders (as we do to track the LRO [Lunar Reconnaissance Orbiter] spacecraft in low lunar orbit and to watch the Earth-Moon distance over years), there is really no difference."

It was astrologer Richard Nolle who linked the full moon of March 19 to natural disasters. He claimed that this "supermoon" would trigger massive earthquakes, volcanoes and powerful storms when it arrived.  But scientists assure that this is not the case. ['Supermoon' Did Not Cause Japan Earthquake and Tsunami]

Garvin, for example, said the moon's effects on Earth have been the subject of extensive studies.

"The effects on Earth from a supermoon are minor, and according to the most detailed studies by terrestrial seismologists and volcanologists, the combination of the moon being at its closest to Earth in its orbit, and being in its 'full moon' configuration (relative to the Earth and sun), should not affect the internal energy balance of the Earth since there are lunar tides every day," Garvin wrote.

But while the moon helps drive Earth's tides, it is not capable of triggering devastating earthquakes.

"The Earth has stored a tremendous amount of internal energy within its thin outer shell or crust, and the small differences in the tidal forces exerted by the moon (and sun) are not enough to fundamentally overcome the much larger forces within the planet due to convection (and other aspects of the internal energy balance that drives plate tectonics)," Garvin explained.