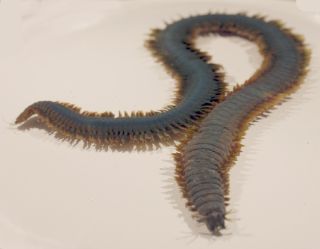 A new genetic analysis of a large group of ringed worms called annelids  proves a 150-year-old hypothesis that these many species can be split into the lazy bums and the jocks.

The annelids, which appear to have rings between the segments of their bodies, are one of the largest animal groups, with over 17,000 species found in environments all over the world. By looking at the genes of several species, researchers confirmed there is a sharp divide in the phylum, with many  groups that actively catch their prey and many other groups that sit like couch potatoes and just filter water passing by in hopes of grabbing some snacks.

The annelids, along with insects and vertebrates, are “segmented” animals, whose bodies are separated into sections. The diversity of body structures and lifestyles in annelids is immense. Even though they are common in many places on Earth (and in the scientific laboratory, where many species are used as model organisms), not much is known about their genetic and evolutionary relationships.

The new analysis, however, uses genetic information about a large number of species in the phylum to map them onto a tree based on how similar they are to one another.

"Now we know where the model organisms are placed [on the annelid family tree] and at what points they evolved," said lead researcher Torsten Struck of the University of Osnabrück in northern Germany. The less related two species are, the longer ago they separated evolutionarily.

Struck and his team acquired genetic data on 17 species from different annelid classes. They added this information to the genetic information other researchers had gathered from another 17 annelids and 5 non-annelid species. They compared each of these species' genetic information at hundreds of places on the genome, looking for how much they differed.

"The most surprising results were that there were two directions of evolution," Struck told LiveScience. "One evolved into more complex life — the hunters — and the other was going more in the direction that they were lazier, that don't need too much energetic capability."

This distinction was hypothesized over 150 years ago by the French naturalist Jean Louis Armand de Quatrefages de Bréau, who separated the annelids into two categories: sedentary annelids that feed on microbes floating by them, and more active species that hunt prey.

Researchers in the 1970s dismissed the hypothesis, because they believed that similar lifestyles and body shapes didn't necessarily mean those species were closely genetically related – they could have arisen separately.

Struck's new analysis shows that these two groupings, called errantia and sedentaria, with different lifestyles are actually genetically dissimilar — that they evolved away from a common, intermediate ancestor into separate groups.

By matching characteristics from more and less evolutionarily related species of annelid, the scientists figured out what the common ancestor of all annelids might have looked like.

Instead of being less evolved than its two daughter groups, this ancestor annelid was some sort of intermediate species with characteristics of both, including structures to help them move and eat (like the hunters), including antennae and complex eyes.

"It will provide a useful foundation for more confident interpretation of the ever-increasing amount of data coming out from annelid work," David Ferrier, a researcher at the Scottish Oceans Institute, who wasn't involved in the study, told LiveScience in an e-mail. The research "provides a major step forward and is the most extensive molecular phylogenetic analysis to date" of annelid evolution.

This study appears in tomorrow's (March 3) issue of the journal Nature.