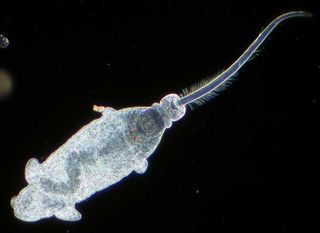 A soldier trematode, which is a parasitic flatworm (lower left), is swallowing an enemy trematode head-first. The victim's tail is hanging from the soldier's mouth.
(Image: © Ryan Hechinger.)

Parasitic worms may possess warrior castes just as social insects do — fearsome soldiers that rip and swallow enemies with their mouths to protect their colonies.

These bloodsucking worms could shed new light on how sociality evolved, researchers said.

Trematodes are parasitic flatworms commonly known as flukes. These flattened oval or worm-shaped creatures feed off their hosts' blood using muscular, pumping mouths — as they have no anuses, their bodily wastes blurt out from their mouths as well. [Video – Watch a trematode devour its enemy whole.]

It might seem unlikely that trematodes can form complex societies, since their brains consist only of a pair of nerve cell clusters. Still, researchers now find these flatworms can form colonies with standing armies and castes of reproductive breeders, just as seen with termites.

Scientists focused on trematodes infecting mollusks such as marine snails. These parasites castrate their hosts and clone themselves over and over again, reaching numbers totaling up to 40 percent of their victim's mass. Several different species of trematodes can infest a single host at the same time.

Past studies had revealed the flatworm species known as Himasthla species B, which infects the California horn snail, Cerithidea californica, had reproductive breeders roughly 1.5-to-2-millimeters long. (For comparison, a pinhead is 2 mm in diameter.) However, in addition to these "primary morphs," the investigators discovered smaller, thinner "secondary morphs," which possessed relatively huge mouths they used as weapons.

"These sleek, agile soldiers defend the worm colony from invaders," said researcher Ryan Hechinger, a zoologist at the University of California, Santa Barbara. "The other caste is comprised of reproductives, which are slow, big, fat, slug-like things that specialize on creating offspring."

The warrior worms are each 0.5 percent to 4 percent the size of breeders in terms of bulk, yet their mouths are roughly the same size as those of their swollen compatriots. Whereas breeders barely moved, warriors were very active, wriggling about five times more.

In experiments, warriors attacked seven different species of trematodes 100 percent of the time, either tearing at their bodies or eating them outright. They attacked trematodes of the same species from different colonies in other snails almost all the time as well. [Image of soldier devouring a reproductive]

"We had a great time doing the attack experiments in the lab," Hechinger said. "It was akin to those slightly sick kid games and TV shows where you pit different things against one another. Sometimes, when we pitted soldiers against soldiers from different colonies, the scene was akin to a bona fide battle royale — trematodes biting trematodes biting trematodes, shaking enemies in the air. The main difference is that they don't throw each other around. Once they bite, they don't let go."

Warriors proved far more common at sites inside snails where other trematodes were most likely to invade from, while breeders lived far away from these battlefronts, mostly near their host's reproductive organs. Although breeders could attack other trematodes, in experiments they did so at much lower rates.

Warriors don't reproduce — none of the 173 warriors the scientists inspected had embryos within them, while 96 percent of the 143 breeders did. At the same time, these half-millimeter-long warriors do not generally appear to be juvenile forms of breeders — it remains uncertain whether a rare few warriors do go on to become breeders, or whether breeders are a completely separate lineage altogether.

Although warrior and breeder trematodes from the same colony may look quite different, as clones of each other, they are actually genetically identical.

"This is the same story for the different cells in our bodies," Hechinger said. "Each cell has the same genes, but one of your nerve cells is very different than one of your liver cells. It's about differently expressing genes." The fact they share the same genes could help explain why the warriors are so willing to fight and die for their companions — although they might not reproduce, they are still helping ensure that their genetic lineage continues.

When they compared trematodes with other social animals with warrior castes, such as gall thrips (tiny winged insects), sea anemones, wood-nesting termites and sponge-dwelling snapping shrimp, the researchers suggest that sociality might have evolved in all these animals for common reasons. They each live in limited areas and seek to monopolize a vital, defensible resource, be it a snail, a gall in a plant, a patch on a rock or a piece of wood. These findings highlight the importance of ecological factors in driving the evolution of social behavior.

"This discovery can open the door to all sorts of work focused on understanding the nature of complex social organization," Hechinger told LiveScience.

The researchers suspect that caste formation is probably widespread among the 20,000 or so trematode species, and have already found evidence in five other species, including ones from marine snails in the Persian Gulf, Japan and western North America.

"There are more questions concerning the soldier castes," Hechinger said. "How extensive are soldier castes among the 20,000 species of trematodes? Will soldiers appear where we predict, in situations where invasion is more intense? Are soldier castes inducible? That is, can colonies amp up the army when under greater levels of attack?"

"How exactly are castes formed?" he added. "How do the worms communicate? How do soldiers recognize soldiers from the same versus different colonies? What other sorts of division of labor occur? There are questions that we haven't considered yet that will now be possible only because we've recognized the social nature of trematodes. Future work is wide open."

The findings might also help keep these parasitic flukes from infecting humans or livestock.

"Some trematode species are major problems," Hechinger said. "Hundreds of millions of people are infected by blood flukes. You may have also heard of liver flukes and lung flukes."

Trematodes generally infest mollusks as intermediate hosts before they go on to other hosts, such as us.

The scientists detailed their findings online Sept. 15 in the Proceedings of the Royal Society B.