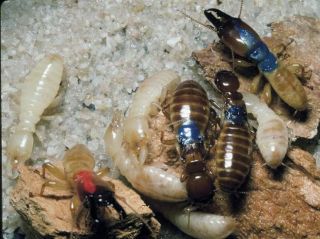 A study of termites reveals how "worker" insects may have emerged. Here, an image of termites painted for the study.
(Image: © Barbara L. Thorne, University of Maryland.)

Natural selection argues for small biological changes that yield greater chances of survival and successful reproduction. Yet, that process does not square well with the evolution of social insects, particularly when their colonies can have over a million non-reproductive members.

A new study of termites may have the answer for such an evolutionary question, first posed by Charles Darwin nearly 150 years ago: How does natural selection support insect "worker" and "soldier" offspring who never reproduce, find mates or start their own colonies?

Apparently, the answer may be because the workers and soldiers stay home.

"This question about the evolution of social behavior among insects really intrigued me," said lead researcher and University of Maryland evolutionary biologist Barbara Thorne, who has spent nearly 30 years pursuing the answer.

"Social insects are extremely successful and dominant in many different habitats all over the world, yet we don't understand how this thriving but complex colony structure evolved. It's why I got involved in these studies when I was a young graduate student."

Thorne's recent research, funded in part by NSF, puts forth a novel theory that it was more advantageous for early termite offspring to stay at home and help their parents than risk dangerous attempts at creating independent colonies away from the nest where they would be more susceptible to predators. The termite youngsters had the best opportunity to take over the reproductive throne when their parents were killed by neighbors.

"The incentive to remain home with their siblings and inherit their parents' estate could provide a missing link to the evolution of sterility among social insects," Thorne said.

Thorne and her colleagues Philip Johns and Ken Howard, both now at Bard College, and fellow Maryland colleagues Nancy Breisch and Anahi Rivera, staged meetings between colonies of neighboring Dampwood termites — the most primitive living termites with traits similar to hypothesized ancestors — and also analyzed the termites' genetic markers.

Her team's research shows that when two neighboring termite families within the same log meet, they battle, often leading to the deaths of one or both families' kings and queens.

This paves the way for replacement "junior" kings and queens to develop from either or both colonies' worker offspring. In other words, sterile termites can become reproducers when their parents are killed, becoming the main progenitors for the colony.

Pheromones produced by healthy kings and queens normally suppress gonad development in "helper" classes, and when the kings and queens die, the pheromones disappear or diminish. As a result, suppression lifts and nonrelated, "sterile," helper offspring from both colonies are able to become new "reproductives" and assume the throne.

"Assassination of founding kings and queens may have driven young termite offspring to remain as non-reproducing workers in their birth colonies," said Thorne. Rather than risk dangerous attempts at initiating independent colonies outside the nest, remaining at home may have given them a better opportunity to become reproducers.

It also turns out that hundreds of king and queen founding pairs simultaneously colonize the same dead tree, giving the insects greater opportunity to meet and battle their neighbors. When kings and queens are killed, termites from the unrelated families join forces and cooperate in a larger, stronger group in which new reproductive termites can emerge from either or both colony's worker ranks. Termites from the two families may even interbreed.

Because these young colonies are relatively small, the offspring —who remain as helpers in their parents' nests — have a reasonable chance of inheriting the family's resources and becoming reproductive termites.

"The merged colony also has a size advantage in its next battle with a neighbor," Thorne said. "Thus both unrelated families benefit following colony encounters."

"Ants, bees and wasps also have highly social colonies with queens and sterile helpers, but they have an unusual genetic system that complicates study of their social origins," Thorne said. "Termites have both kings and queens and their colony organization is amazingly convergent with the ants, bees, and wasps, yet they evolved completely independently and have a more normal genetic system. Termites haven't received a lot of attention from evolutionary biologists, yet their case may reveal some fundamental principles."

The primitive living termite featured in the research, genus Zootermopsis, shares social, developmental, and habitat characteristics with ancient ancestors, and thus serves as a model system to draw inferences regarding how highly social behavior evolved in these insects140 million years ago. Once primitive termites had an incentive to stay at home in their parents' nest due to the possibility of early or "accelerated" inheritance, that behavior became fixed and over evolutionary time, termite social behavior passed through what Harvard biologist Edward O. Wilson describes as the "point of no return."