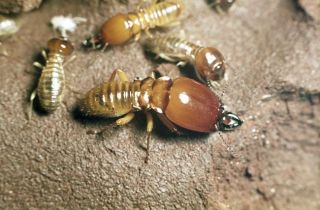 Termites may look like white ants, but new genetic research confirms they are really a social kind of cockroach.

Given how relatively solitary regular cockroaches are compared with termites and their complex societies, researchers note these findings could shed light on how social behaviors develop in all insects.

Researchers added that the cockroach penchant for coprophagy, or eating feces, could very well have led termites to evolve in the first place.

Scientists had long known that cockroaches and termites were related to each other and to praying mantises. Features they all share include specialized cases that enclose their eggs and perforations in the internal parts of their heads.

What researchers have debated for decades is whether or not termites evolved from cockroaches. Evidence suggesting this possibility included symbiotic microbes that certain termites and wood roaches had in common, as well as physical similarities between their young.

After conducting the most exhaustive genetic analyses yet into the subject, studying 107 different species of termites, cockroaches and mantises from across the globe, entomologist Paul Eggleton at the Natural History Museum in London and his colleagues now conclude termites are indeed a family of cockroaches, findings detailed online April 5 in the journal Biology Letters.

"This finally establishes where termites belong within the insects," Eggleton told LiveScience.

At first these results might appear unlikely, given the extraordinary differences in behavior and diet between these insects. Although cockroaches are somewhat convivial, they cannot hold a candle to the astonishingly complex societies termites can form, with colonies including up to millions of insects specialized into workers, soldiers, kings and queens. And termites are renowned for eating dead wood, while cockroaches are well-known coprophages, or feces-eaters.

Eggleton and his colleagues note, however, that ants and bees, which are likewise social, evolved from solitary wasps. They added that cockroach traits such as their gregariousness and their coprophagy might have set the stage for the evolution of termites.

When termite ancestors devoured each other's droppings, they could have shared the microbes that eventually led to a key termite feature, the ability to break down wood. Ensuring such wood-digesting microbes get passed on to offspring requires a close relationship between parents and their young, laying the groundwork for "their whole complex social system to have evolved," Eggleton said.