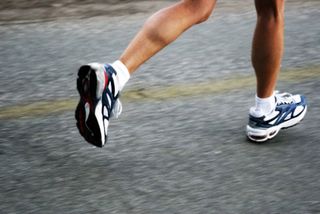 Running shoes may have changed the way people run, causing them to strike the ground with their heel first, a new study says.
(Image: © stockxpert)

So, you want to have a really long race that eventually will attract the best runners from around the world. Unlike other races with boring names like the "mile" and the "400 meter," with their well-defined distances, your race commemorates an ancient Greek town with an unusual route totaling somewhere around 24 to 26 miles.

Well, if you're Pierre de Coubertin, founder of the International Olympic Committee and the Modern Olympics, that was exactly the plan for the marathon at the 1896 Olympics in Athens. The Olympic Games actually inspired the first Boston Marathon, which culminated on April 19, 1897.

In a nod to Greek history, the first marathon commemorated the run of the soldier Pheidippides from a battlefield near the town of Marathon, Greece, to Athens in 490 B.C. According to legend, Pheidippides ran the approximately 25 miles to announce the defeat of the Persians to some anxious Athenians. Not quite in mid-season shape, he delivered the message "Niki!" (Victory!) then keeled over and died.

So, de Coubertin organized the first official race from the Marathon Bridge to Olympic Stadium in Athens, a distance of about 24.85 miles or 40,000 meters. Spiridon Louis, a Greek postal worker, won that first race in 2 hours, 58 minutes, 50 seconds, finishing seven minutes ahead of the pack. Of the 25 entrants, only 9 runners hit the finish line.

After 1896, the next few Olympic marathons varied in distance with the idea that as long as all runners ran the same course, there was no need to keep the distance exactly the same.

For the 1908 London Olympics, the course was laid out from Windsor Castle to White City stadium, about 26 miles. However, to locate the finish line in front of the royal family's viewing box, an extra 385 yards was added inside the stadium. Hence the marathon tradition of yelling "God save the Queen" in the last mile.

Despite the success of that first race, it took 13 more years of arguing before the International Amateur Athletic Federation (IAAF) adopted the 1908 distance as the official marathon. In fact, of the first seven modern Olympics, there were six different distances.

Today, there are more than 500 organized marathons in 64 countries around the world each year, with more than 425,000 marathon finishers in the United States alone. As many of these veterans will tell you, the first 26 miles are easy, its that last quarter mile that will kill you.