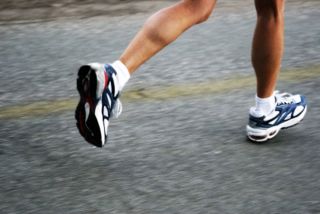 Running shoes may have changed the way people run, causing them to strike the ground with their heel first, a new study says.
(Image: © stockxpert)

Dirty air could hinder the performance of women in marathons, a new study finds.

Multiple runnings of each marathon were evaluated, from eight to 28 consecutive years, depending on the race.

The top three male and female finishing times were compared with the course record and contrasted with air pollutant levels, taking high temperatures (which can negatively impact running performance) into consideration.

Higher levels of particles in the air — also known as smog — were associated with slower performance times for women. Men, however, showed no significant impact from pollution.

And "although pollution levels in these marathons rarely exceeded national standards for air quality, performance was still affected," Marr said.

Although the average person walking on the street might not be significantly impacted by low-yet-still-acceptable air quality, marathoners are atypical because of their breathing patterns.

"Previous research has shown that during a race, marathon runners inhale and exhale about the same volume of air as a sedentary person would over the course of two full days," Marr said. "Therefore, runners are exposed to much greater amounts of pollutants than under typical breathing conditions."

Of the pollutants found in the air, particular matter (tiny solid and liquid particles, such as dust and soot, suspended in the air) seemed to be the only type that affected performance. Carbon monoxide, ozone, nitrogen dioxide and sulfur dioxide didn't impact racing times for men or women.

The results of the study are detailed in the March issue of the journal Medicine & Science in Sports & Exercise.