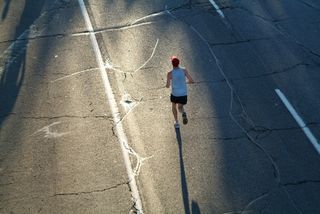 Serious runners know the feeling, a sense of never-ending endurance that comes on a long run. But is it good for you? The sensation may be addictive, the new study finds. Image
(Image: © Stockxpert)

The deaths of three runners at Sunday's Detroit Marathon were tragic, but probably not representative of any increasing danger inherent in the sport.

In fact, the deaths are likely to be a statistical fluke, doctors say.

A 26-year-old half-marathon runner, and two other runners — a 36-year-old and 65-year-old — died during the event. Though autopsy results are pending, experts say the most likely cause of death while running such a strenuous race is one related to heart disease.

And though a group of three deaths seems like an alarming spike, marathon fatalities are still relatively rare.

"Rare things occasionally occur in clusters, so that’s going to happen," said University of Minnesota physician William Roberts, a former president of the American College of Sports Medicine. "Think of how many marathons there's been around the country this year with no deaths."

In general, somewhere between 1-in-50,000 and 1-in-75,000 people who finish a marathon will die from it. So three deaths at an event with 19,000 registered runners is high, but not necessarily off-the-charts, statistically speaking.

"This is kind of expected — we've known for years that there is a risk," said Robert Sallis, chief of sports medicine at Kaiser Permanente Medical Center in Fontana, Calif., and also a past president of the American College of Sports Medicine. "Any time you get this many people together someone is likely to have an event."

Prior to this weekend, the last death at the Detroit Marathon occurred in 1994 when a 42-year-old man died of a heart attack after running more than 20 miles, the Associated Press reported.

Running a marathon can trigger heart attacks because the increased exertion raises a person's heart rate, which boosts the heart's blood demand. If there is any blockage to the arteries, they can't accommodate this increase in blood flow, and the heart can't get enough blood, causing a heart attack.

But among people who properly train for a marathon and work their body up to such a peak performance, heart failure is very rare.

"I think the overlying message has got to be marathon running is good for your health," Sallis told LiveScience. "It prevents far more deaths than it ever causes. If people use this as a reason not to run, that would be the ultimate damage."

And heart disease is extremely unlikely in the case of the 26-year-old who died, Sallis said. The runner may have had an underlying heart abnormality that was pushed over the limit by the strenuous exertion.

One of the most famous cases of running fatalities is Jim Fixx, a well-known runner and fitness advocate who died at age 52 from a heart attack after his daily run. Though some said it proved that running was too dangerous, doctors pointed out that Fix had a strong family history of heart disease.

"Even though he died while he was out for a run, it's clear that the running was beneficial to him," Sallis said. "He's not an example of why marathon running is dangerous. It's clear to me that the running probably prolonged his life."

There is some evidence to suggest that the rate of death among marathon runners is lower than among regular joggers — probably because marathoners are in better shape from training.

"In the long run it's more dangerous to be sedentary than it is to be regularly physically active," Roberts said. "It's people who don’t do anything except walk to the refrigerator who are the ones that are at the most risk [of heart disease]."