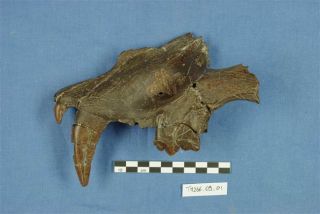 Two fearsome, newfound species of saber-toothed cats might once have stalked the earliest ancestors of humanity, researchers suggest.

However, the feline predators might have also proven to be a boon to these distant forerunners by leaving behind meat from which our ancient relatives could have scavenged, scientists added.

The new fossils were uncovered in the vast, flat, windy Djurab desert in northern Chad in central Africa. This is also where what may be the earliest member of the human lineage known so far was discovered — the 6.5-million-to-7.5-million-year-old human-like, chimp-like Sahelanthropus tchadensis, nicknamed "Toumai." Babies born close to the dry season in the Djurab are named Toumai, which in the local Goran language means "hope of life."

Toumai was discovered alongside the bones of a wide variety of animals — crocodiles, three-toed horses, fish, monkeys, hippos, aardvarks, turtles, rodents, giraffes, snakes, antelopes, pigs, mongooses, foxes, hyenas, otters and honey badgers. The area was once the shore of a lake, generally forested close to the waters with savannah-like areas too far away, said researcher Louis de Bonis, a paleontologist and paleoanthropologist at the University of Poitiers in France.

"The work conditions are hard. In the desert the temperature is changing along the day," de Bonis recalled. "The night and early in the morning it is cold and we wear winter coats; at noon, it is very hot and we wear a shirt or no shirt at all; and at 7 p.m. we take again the winter coats. Another problem with the wind and the sand occurs because the very fine sand can enter the clothes, ears, eyes and so on, which is very unpleasant." The desert, he added, also has snakes and scorpions that researchers must look out for.

Scientists had known one giant species of saber-toothed cat also lived there and was the largest predator of that area — Machairodus kabir, which at 770 to 1,080 pounds (350 to 490 kilograms) outweighed the largest living cat, the tiger, which can reach up to 660 pounds (300 kg).

Hominids such as Toumai could have been prey for these predators, de Bonis said. Still, another possibility is that antelopes and other large victims these saber-toothed cats brought down could have left behind large amounts of flesh to feed our distant relatives, de Bonis suggested.

These fossils also reveal interesting clues about the origin and behavior of saber-toothed cats. For instance, Lokotunjailurus was only known in East Africa, meaning that scimitar-toothed cats are now known found at least 1,550 miles (2,500 kilometers) from their original known locale. Also, Megantereon was thought to perhaps originate in North America and later dispersed to the Old World, but this ancient specimen suggests it originated in the Old World and later migrated to the New World.

The scientists detailed their findings online Sept. 21, in the journal Comptes Rendus Palevol.