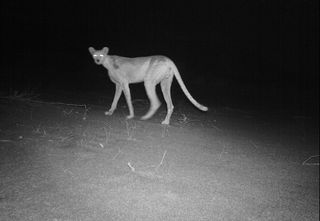 An elusive Saharan cheetah recently came into the spotlight in Niger, Africa, where a hidden camera snapped photos of the ghostly cat, whose pale coat and emaciated appearance distinguish it from other cheetahs.

In one of the images the sleek, light-colored cat with small spots on its coat and a small head is turning in the direction of the camera, its eyes aglow.

Its appearance, and how the Saharan cheetah (Acinonyx jubatus hecki) is genetically related to other cheetahs is open to question, said John Newby, CEO of the Sahara Conservation Fund (SCF), who is part of the team, along with SCF's Thomas Rabeil and others, who captured the camera-trap snapshots between July ad August. What they know about this species comes from the few photos they've managed to capture.

"I think we were more happy than surprised when the images turned up, because we knew cheetahs were in the general area because we had seen their tracks on several occasions," Newby said. "However, the area is so vast that picking up an animal as rare as this always entails a lot of luck and good judgment on where to place the cameras."

The animal is so rare and elusive scientists aren't sure how many even exist, though they estimate from the few observations they've made of the animal and tracks that fewer than 10 individuals call the vast desert of Termit and Tin Toumma in Niger home. Fewer than 200 cheetahs probably exist in the entire Sahara. [10 Species You Can Kiss Goodbye]

Losing this cheetah would also mean losing important genetic and biological diversity, as these animals have adaptations for survival in extreme desert conditions.

Their home can reach sizzling temperatures up to 113 degrees Fahrenheit (45 degrees Celsius), and is so parched no standing water exists. "They probably satisfy their water requirements through the moisture in their prey, and on having extremely effective physiological and behavioral adaptations," Newby said.

In an effort to conserve water and stay out of the heat, the Saharan cheetah is even more nocturnal than other cheetahs.

Spotting these cats in the wild has been a challenge. "They are incredibly shy and elusive animals," Newby said. In addition, they likely have broad home ranges since their prey – gazelles, hares, large birds and smaller rodents – are relatively scarce. Observations that have been made suggest they prefer caves and rock shelters as breeding dens.

Among the threats to the pale cat are scarcity of prey due to poaching and overuse, and conflicts with herders over stock harassment and killing of their animals, according to SCF. Apparently cheetah skins are prized as prayer rugs or used to make slippers.

"They are suspected of taking goats and even baby camels, and as a result are persecuted just like most other large predators," Newby said. "Work underway with local nomads is putting together the true picture of livestock predation in an attempt to reduce the arbitrary slaughter of carnivores that has massively reduced populations of cheetah and striped hyenas."

Newby and Rabeil say the camera-trap study will provide tangible evidence for the cheetah's existence in the Termit area.

"The more we know about the animal the better we can conserve it, including pinpointing key areas for extra protection," Newby said. "The cheetah’s presence adds weight to arguments for the entire zone’s protection as a nature reserve and strengthens our ability to raise support for conservation activities."

The Saharan cheetah is listed as critically endangered on the 2009 IUCN Red List of Threatened Species. (IUCN stands for International Union for Conservation of Nature.)