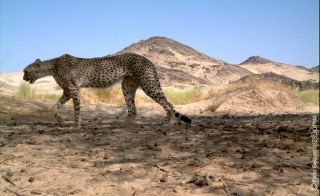 Another of the first camera-trap photos of cheetahs in Algeria. The images were snapped as part of the first systematic camera trap survey across the central Sahara.
(Image: © Farid Belbachir/ZSL/OPNA)

Four Saharan cheetahs have been photographed as part of the first systematic camera-trap survey across the central Sahara.

The four big cats — a subspecies of cheetah (Acinonyx jubatus hecki) — were roaming in Algeria and identified via spot patterns unique to each individual, as part of a survey covering an area of 2,800 square kilometres (1,081 square miles).

"The Saharan cheetah is critically endangered, yet virtually nothing is known about the population, so this new evidence, and the ongoing research work, is hugely significant," said Sarah Durant, Zoological Society of London (ZSL) senior research fellow. The Northwest African cheetah is found over the Sahara desert and savannas of North and West Africa, respectively, including Algeria, Niger, Mali, Benin, Burkina-Faso and Togo. The populations are very fragmented and small, with the biggest thought to be found in Algeria.  The ongoing surveys in the region will also work with the local Tuareg pastoralist community to find out more about the ecology of the cheetah and identify threats to it.  The survey was conducted by researchers from ZSL, the Office du Parc National de l’Ahaggar (OPNA), and the Université de Béjaïa, with support from the Wildlife Conservation Society and Panthera. Farid Belbachir, who is implementing the field survey, said: "This is an incredibly rare and elusive subspecies of cheetah, and current population estimates, which stand at less than 250 mature individuals, are based on guesswork. This study is helping us to turn a corner in our understanding, providing us with information about population numbers, movement and ecology."