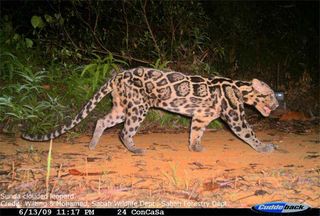 By sleuthing through genes found in feline pelts more than a century old, scientists have discovered that the newest species of big cat known to science, the mysterious Sunda clouded leopard, actually comes in two different types.

The clouded leopards — the most elusive of all the big cats — make up the group known as genus Neofelis. Seen from the foothills of the Himalayas through Southeast Asia into China, they are most notable for patches on their fur said to be shaped like clouds and for the largest canine fangs relative to their bodies of any living cat. (Despite their name, clouded leopards are not actually a kind of leopard, but are completely separate from the genus that includes lions, tigers, leopards and jaguars.)

"They're sometimes even called modern-day saber-toothed cats," researcher Andreas Wilting, a wildlife biologist at the Leibniz Institute for Zoo and Wildlife Research in Berlin, told LiveScience from Borneo.

Comparisons between the clouded leopards of mainland Asia and the Sunda Islands of Southeast Asia, which include Borneo, Java, Sumatra and Bali, revealed the Sunda clouded leopard was genetically distinct, making it the newest species of big cat known to science. [Images: Clouded Leopards & Other Baby Animals]

Although scientists wanted to learn more about the Sunda clouded leopard (Neofelis diardi), "they are hard to find in the forest," Wilting said.  As such, he and his colleagues investigated DNA they gleaned from clouded leopard pelts, skulls, claws and bones gathered on the islands and kept in museums worldwide for up to more than a century, as well as excrement collected more recently by researchers in the field.

"Working with ancient DNA from museum specimens that were often highly degraded was a major challenge," Wilting said.

"Although we suspected that Sunda clouded leopards on Borneo and Sumatra have likely been geographically separated since the last ice age, it was not known whether this long isolation had caused them to split up into separate subspecies," Wilting said.

There were considerable genetic differences between the groups. There were also physical distinctions, often subtle in nature. A comparison of coat color patterns conducted by researcher Andrew Kitchener from National Museums Scotland saw only small deviations between the groups, which could be due to how the highly similar tropical habitats on the islands demanded similar camouflage strategies. The skulls also showed minor variations, according to researcher Per Christiansen of the University of Aalborg in Denmark — for instance, the Sumatra cat has a slightly wider nasal aperture relative to muzzle width than the Borneo one.

The timing of these divergences hints that natural disasters and rising sea levels were responsible for these splits. To start with, the eruption of the "super volcano" Toba on Sumatra roughly 75,000 years ago probably devastated Southeast Asia, with only two groups of clouded leopards surviving, the mainland ones in southern China and the Sunda cats in Borneo. The latter then colonized Sumatra, and once sea levels rose, eliminating the land bridges that once connected the Sunda Islands, the isolated population developed into a new subspecies.

"I find it most fascinating how we can work with DNA samples to look at the history of clouded leopards and see what their evolution was — when they split apart, and what might have done it," Wilting said.

Both subspecies of Sunda clouded leopard are classified as endangered, since their numbers are low just like all other big cats. In order to save the Sunda clouded leopard, it is paramount to protect large areas of forest in Borneo and Sumatra or at least to manage them sustainably, Wilting said. The researchers are working closely with wildlife officials in the Malaysian state of Sabah in Borneo to investigate and conserve the cats.

"This knowledge that there are two subspecies of Sunda clouded leopard is very important for breeding programs that might help save these cats in captivity," Wilting said.  "If you want to protect their genetic diversity when breeding them, you should keep them separate and not merge them."

The scientists will detail their findings in an upcoming issue of the journal Molecular Phylogenetics and Evolution.