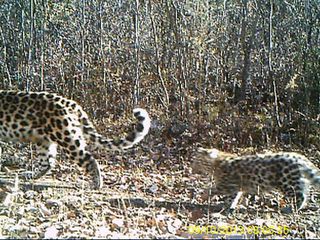 An Amur leopard mama and cub trapped on camera in China
(Image: © WCS)

Two Amur leopard cubs were spotted on a wildlife camera in China, the first evidence that this critically endangered big cat is breeding in the region, the Wildlife Conservation Society announced today (Nov. 26).

The leopard cubs were seen with a female adult leopard at the Wangqing Nature Reserve in northeast China, about 18 miles (30 kilometers) away from the main Amur leopard population on the Russia-China border.

"This incredible find is important for two reasons. Firstly, it shows that our current efforts are paying off, but, secondly, it shows that China can no longer be considered peripheral to the fate of both wild Amur leopards and tigers," Joe Walston, the Wildlife Conservation Society's executive director for Asia Programs, said in a statement. "With a few key decisions by the government, China could become a major sanctuary for the species.” [Video: Rare Amur Leopard Cubs Spotted in China ]

Far Eastern or Amur leopards are the world's most endangered big cats, with between 30 and 50 individuals still roaming in the wild. Poaching and habitat loss have nearly wiped out the leopard in its native hunting grounds in China and Korea, but frigid temperatures and deep snow prevent the population from spreading further north. Now, the leopards cling to survival on a tiny sliver of habitat along the Russia-China border, from the Sea of Japan to China's Jilin Province.  [See Images of the Amur Leopard Mama and Cubs]

The elusive cats were spotted earlier this week crossing the camera trap.

The camera traps that spotted the leopard cubs are just one element of a broad conservation effort to prevent the wild cats' extinction. Last year, similar camera traps spotted an Amur leopard in China for the first time.

Conservation groups are also working to improve law enforcement protections for the animals, as well as teaching local people how to keep their livestock safe from the predators to minimize conflicts. And in 2012, the Land of the Leopard National Park, a conservation area covering about 60 percent of the cat's habitat, was opened in Russia's Far East.