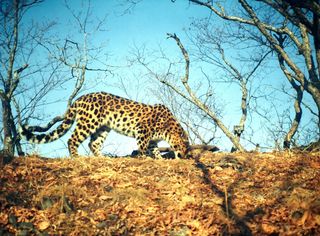 Eight Amur leopards have been caught on camera in southeastern Russia. Fewer than 40 of the big cats survive in the wild.
(Image: © © WWF-Russia / ISUNR)

A new national park in Russia is an attempt to save the world's rarest cat, the Amur leopard.

Fewer than 40 Amur leopards are believed to exist in the wild, according to the WWF. While most leopards stick to the savannas of Africa, the Amur leopard loves cold and high-elevation habitats, such as that found in the far east of Russia and in northern North Korea.

The new national park will help protect these large cats, which can reach 110 pounds (48 kilograms). The land will also become home to 10 Amur, or Siberian, tigers, another endangered species. Amur tigers were once in as dire a situation as Amur leopards, but their population is rebounding, with an estimated 360 tigers in the wild today.

The park will welcome eco-tourists. Russia has invested $16.6 million in the park's infrastructure, with a pledge of $1.3 million more for upkeep. The hope is that the protected land will help bolster the struggling Amur leopard population, which has lost massive amounts of habitat to human encroachment.