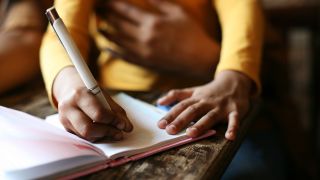 Being a "righty" has historically carried distinct advantages over being a "lefty."
(Image: © Shutterstock)

The first time you picked up a crayon as a small child, you probably felt more comfortable and more natural drawing with one of your hands than the other one.

Excluding the small number of truly ambidextrous people — those who can use their right and left hands with equal ease — humans generally have a dominant hand (and side of their body) that they favor for everyday tasks.

But why is that?

Most people — about 85 to 90% — are right-handed, and there's no population on Earth where left-handers are in the majority.

That uneven split has had some historic downsides for lefties. They've had to use scissors, desks, knives and notebooks that were designed with righties in mind. Many lefties were forced, against their natural inclination, to write with their right hands (including some famous examples like King George VI of England). They've been discriminated against and eyed with suspicion, as evidenced in the language used to describe lefties. "Right" in English obviously also means "correct." The etymology of the word "sinister" can be traced back to the Latin word for "left."

While the stigma against left-handedness has faded in most places, scientists are still confounded by the righty-lefty divide. Researchers are still trying to understand what makes people prefer one hand over the other and why righties dominate.

On an individual level, handedness might be determined at the earliest stages of development. Scientists reported in 2005 in the journal Neuropsychologia that fetuses will show a hand preference in the womb (by sucking the thumb of one hand), a proclivity that continues after they're born.

While there's no righty or lefty gene, DNA does seem to play a role in handedness. In a recent study published in Brain: A Journal of Neurology, researchers at the University of Oxford looked at the DNA of about 400,000 people in the U.K. and found that four regions of the genome are generally associated with left-handedness. Three out of these four regions were involved in brain development and structure. Some researchers hope that studying the biological differences between lefties and righties could shed light on how the brain develops specializations in its right and left hemispheres.

Trying to answer the question of handedness from an evolutionary perspective is also complicated. Researchers can detect handedness in the archaeological record by looking for certain anatomical traits in prehistoric skeletons, such as asymmetry in the size and density of arm bones, and by examining prehistoric tools.

"If you know how the tool was held and how it was used, then you can look at the wear traces" to determine if a lefty or righty used the tool, said Natalie Uomini, a senior scientist at the Max Planck Institute for the Science of Human History in Germany. Scientists can even look at the direction of diagonal scratches on fossilized teeth to see which hand people were using to tear off meat or animal hides in their mouths.

Righties have dominated for as far back in the archaeological record as researchers can see, about 500,000 years, Uomini said. Neanderthals, our now-extinct human cousins, were also strongly right-handed.

That makes humans pretty strange among animals. Several nonhuman species, such as the other great apes, are individually handed, but the split between righties and lefties is typically closer to 50-50.

What caused our extreme bias toward right-handedness to evolve and persist? From an evolutionary perspective, if right-handedness evolved because it had some kind of advantage, then you might expect left-handers to disappear completely, Uomini told Live Science. She added that there are some disadvantages to being left-handed, such as higher frequencies of work accidents. Researchers also linked left-handedness to learning disabilities, in a study published in 2013 in Brain: A Journal of Neurology.

But there's a leading theory to explain why left-handers have maintained a constant minority: the fighting hypothesis.

"The idea is that in hand-to-hand combat, or in combat with weapons, there is an evolutionary advantage to being a minority left-hander," Uomini said. "If you're left-handed, you have a surprise advantage because most people are used to fighting against right-handers." That lefty advantage has been shown in one-on-one sports like fencing, scientists reported in 2010 in the journal Laterality.

If that hypothesis is correct, it would mean that even though the downsides to left-handedness were significant enough to keep lefties in the minority, lefties' advantage in combat at least gave them a fighting chance against eventual extinction.