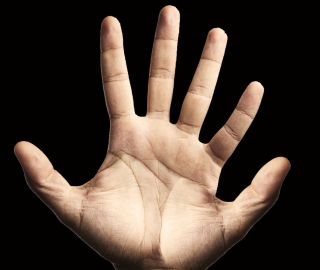 If our hands had six fingers, math might be easier.
(Image: © Hand image via Shutterstock; Editing credit: Life's Little Mysteries)

As incredible as our hands are — capable of everything from threading needles to splitting wooden boards — there's no telling whether they are just right, or merely good enough. Evolutionary biologists don't quite know why humans, and the vast majority of four-limbed earthlings, have five digits per limb. Would life be much better or worse if our hands had evolved with six fingers instead?

An extra digit next to our pinkies would make some tasks easier. We could strum more complex musical instruments, type faster and grip objects more firmly. "And a broader hand would make it easier to palm a basketball," said Cliff Tabin, a geneticist at Harvard Medical School who studies limb development in vertebrates. "But our fine motor manual dexterity is mostly thumb and index finger. An extra little finger more (or less) would not change much," Tabin told Life's Little Mysteries.

By far the biggest impact would be on math — and a different number system could have surprisingly profound consequences.

Worldwide, most humans count in blocks of 10: we tally up to nine of something before shifting over to a new number column and starting again with one (so that each column is worth 10 times the amount in the column to its right). This is a "base-10" numeral system, and anthropologists believe we use it because we have 10 fingers — evidenced by the fact that the word "digit," as well as its translation in many other languages, refers to both fingers and numerals.

Perhaps it wouldn't have mattered much — perhaps counting systems are six of one, half dozen of the other — but Mark Changizi thinks otherwise. Changizi, director of human cognition at 2AI Labs, a research institute in Boise, Idaho, has proposed that many human endeavors, be they math, language or music, undergo rapid progress when human cultures happen to adopt the most natural form of expression for a given endeavor.

"I've argued in [my book] 'The Vision Revolution' that our ability to read so brilliantly relies on the shapes of letters having culturally evolved to 'look like nature,' namely to have the contour-combinations found in natural scenes, and thereby harnessing our visual-object-recognition software for reading," Changizi said. "And I've argued in my newest book, 'Harnessed,' that our ability to process speech is due to speech having culturally evolved to 'sound like nature,' namely to sound like the solid-object-event sounds occurring in terrestrial habitats we evolved within."

When culture taps into the conditions of our evolution and constructs a natural way of performing some task, we do it beautifully. When culture fails to "harness" human evolution, "we do the new task in a halted, stilted, pathetic fashion," he said. "Doing logic, for example, is a classic case where we seem to not be being harnessed well, as even the simplest notions in logic are notoriously hard for really smart people to do."

So, returning to the mathematical impact of finger counts, 12 fingers could have significantly affected human mathematical abilities. The number 12 has many more factors than the number 10, after all. "Getting the 'right' numeral system for our brains can make the difference between reading as we know it today versus what reading would be like if we had to read bar codes (which we'd always be terrible at, no matter how long we train)," Changizi said. [Breaking the Code: Why Yuor Barin Can Raed This]

He added, "Whether moving from base-10 to base-12 would do the trick (and turn us into Homo numerate) I don't know. But it could be one of multiple hacks to our 'number technology' that gets it closer to an optimal harnessing solution."

Extra fingers frequently pop up as birth defects; it's called polydactyly, and it's a simple genetic error. But natural selection has not gripped onto those extra fingers and made them permanent. Why not? Tabin argues it's because a duplicate finger contributes nothing new and so doesn't confer any worthwhile evolutionary advantage. If we did develop a true sixth finger, it would probably grow up out of our wrist bones as an extra quasi-thumb.

This is the standard model for the few six-digit tetrapods (four-limbed animals) that already walk the Earth, such as the panda, which has an extra thumblike protrusion on the far side of its smallest digit, an extension of a wrist bone that the panda uses for support while gripping bamboo. [What Distinguishes Humans from Other Animals?]

But an extra thumb wouldn't arise in humans, Changizi argues. He has conceived a theory to explain the five-digit-per-limb rule of thumb in the animal kingdom, which he calls the "limb law." It's a simple mathematical formula, derived from rules for nodes in computer networks, that predicts the optimal number of limbs a body needs for connecting to the outside world, based on its size. The law dictates that when limbs are very long relative to a body, the ideal number of limbs is six (think insects); as the limbs get shorter, their number rises toward infinity (think millipedes). The limb law also suggests a number of fingers that a hand should have when treating fingers as the limbs of hands. Considering that they must be the right length to fold over onto the palm, the optimal number of fingers for a human hand turns out to be five.

"If we were to add a new digit for some newfangled task (typing, surgery, fanning oneself, etc.), then we'd be considerably off the optimal morphology for what our hands evolved to do, which concerns grasping of various sorts," Changizi said.

Frank Wilson, a retired neurologist who has been a leading authority on the hand-brain relationship for decades, agrees that six fingers is too many. In fact, he says modern prosthetics engineering shows robotic hands do just as well with two, three and four digits as with five. "The actual number of fingers is probably incidental, as the people trying to create upper limb prosthetics are discovering," Wilson said. "So, I'd vote for four fingers before I'd vote for six."