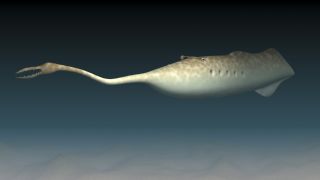 The Tully Monster was a weirdo.
(Image: © Stocktrek Images/Getty Images)

Every now and again, scientists discover fossils that are so bizarre they defy classification, their body plans unlike any other living animals or plants. Tullimonstrum (also known as the Tully Monster), a 300 million-year-old fossil discovered in the Mazon Creek fossil beds in Illinois, US, is one such creature.

At first glance, Tully looks superficially slug-like. But where you would expect its mouth to be, the creature has a long thin appendage ending in what looks like a pair of grasping claws. Then there are its eyes, which protrude outward from its body on stalks.

Related: See Images of the Ancient and Mysterious 'Tully Monster'

Tully is so strange that scientists have even been unable to agree on whether it is a vertebrate (with a backbone, like mammals, birds, reptiles and fish) or an invertebrate (without a backbone, like insects, crustaceans, octopuses and all other animals). In 2016, a group of scientists claimed to have solved the mystery of Tully, providing the strongest evidence yet that it was a vertebrate. But my colleagues and I have conducted a new study that calls this conclusion into question, meaning this monster is as mysterious as ever.

The Tully Monster was originally discovered in the 1950s by a fossil collector named Francis Tully. Ever since its discovery scientists have puzzled over which group of modern animals Tully belongs to. The enigma of Tully's true evolutionary relationships has added to its popularity, ultimately leading it to become the state fossil of Illinois.

There have been many attempts to classify the Tully Monster. The majority of these studies have focused on the appearance of some of its more prominent features. These include a linear feature in the fossil interpreted as evidence of a gut, the light and dark banding of the fossil and the peculiar grasping claws of its mouth. The body plan of the Tully Monster is so unusual in it's entirety that it will greatly expand the diversity of of whatever group it ultimately belongs to, changing the way we think about that group of animals.

The 2016 research argued the animal should be grouped with vertebrates because its eyes contain pigment granules called melanosomes, which are arranged by shape and size in the same way as those in vertebrate eyes. But our research shows that the eyes of some invertebrates such as octopus and squid also contain melanosomes partitioned by shape and size in a similar way to Tully's eyes, and that these an also be preserved in fossils.

To do this, we used a type of particle accelerator called a synchrotron radiation lightsource located at Stanford University in California. This allowed us to explore the chemical makeup of samples from fossils and from animals living today. The synchrotron bombards specimens with intense bursts of radiation to "excite" the elements within them. When excited, each element releases X-rays with a specific signature. By detecting the emitted X-ray signatures, we can tell what elements were excited and ultimately what the specimen we're interested in is made of.

First we found that melanosomes from the eyes of modern vertebrates have a higher ratio of zinc to copper than the modern invertebrates we studied. To our surprise, we then found the same pattern could be seen in fossilised vertebrates and invertebrates found at Mazon Creek.

We then analysed the chemistry of Tully's eyes and the ratio of zinc to copper was more similar to that of invertebrates than vertebrates. This suggests the animal may not have been a vertebrate, contradicting previous efforts to classify it.

We also found that Tully's eyes contain different type of copper to that found in vertebrate eyes. But the copper also wasn't identical to that in the invertebrates we studied. So while our work adds weight to the idea that Tully is not a vertebrate, it doesn't clearly identify it as an invertebrate either.

Where do we go from here? A broader analysis of the chemistry of melanosomes and other pigments in the eyes of a wider range of invertebrates would be a good next step. This may help to further narrow down the group of animals to which Tully belongs.

Ultimately the riddle of what kind of creature the Tully Monster is continues. But our research demonstrates how studying fossils at the chemical and molecular levels can play an important part in figuring out the identity of this and other enigmatic creature.