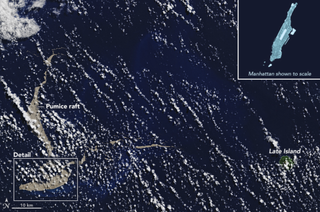 On Aug. 13, the Landsat 8's Operational Land Imager captured a photo of a large pumice raft that was formed by an underwater volcano.
(Image: © NASA)

A large mass of hardened lava is headed toward Australia. Scientists think that the lava raft could help to save the declining Great Barrier Reef, according to recent news reports.

A couple of weeks ago, sailors first spotted a so-called pumice raft in the Pacific Ocean, and other sailors reported seeing clouds of smoke in the direction of the volcanic island Fonualei, in the Kingdom of Tonga. On Aug. 9, NASA's Terra satellite detected the raft and on Aug. 13, the Landsat 8's Operational Land Imager captured a photo of it.

Pumice rafts are formed when an underwater volcano erupts, releasing large chunks of lava that are full of holes and cavities,  making it easy for the raft to float, according to the Earth Observatory. Related: Photos: Hawaii's New Underwater Volcano

The satellite image and reports by sailors led volcanologists from the Smithsonian Institution to tie the rock to an eruption of an unnamed underwater volcano somewhere near Tonga, according to the observatory. The tip of the unnamed volcano is thought to be 130 feet (40 meters) below the water's surface, and it's last documented eruption was in 2001.

Sailors who came across the rock described it as "dangerous to vessels" and said that it looked like a mass of "rocks from marble to basketball size," on a Facebook post. They also said there was a "faint but distinct smell of sulfur." The pumice covers about 58 square miles (150 square kilometers) according to the BBC.

The raft has since drifted southwest, and as of Aug. 22, had slightly dispersed and moved north, according to the observatory. But in general, the chunk of rock seems to be heading in the direction of Australia and its Great Barrier Reef.

In 2016 and 2017, a mass bleaching event killed around half the corals in the Great Barrier Reef. But scientists think that the structure has a chance of bouncing back, potentially with gifts brought in by its rocky visitor.

Pumice rafts are often teeming with sea life, such as new barnacles and corals, Scott Bryan, a professor of geology and geochemistry at Queensland University of Technology, told CNN. Bryan reported in a 2012 study that these rocky rafts can be a way to redistribute life across the ocean.But the pumice raft is no guaranteed life raft for the reef; there's also the possibility that it could introduce invasive species to the area that could be harmful, he said.